This site closed in March 2021 and is now a read-only archive
Previous Next
LX
lxflyer 23 July 2020 7:59pm
bkman1990 posted:
RTÉ Six-One was on for the full hour with two presenters this evening. Caitriona Perry & Eileen Whelan were presenting it.

She presented it again today.

She was brilliant last night. She is such a pro when called in as a stand in presenter.
RO
rob Founding member 31 August 2020 8:10am
RTE News Now has been rebranded as RTE News today. No graphics changes though.
BK
bkman1990 31 August 2020 4:11pm
There is a new presenter coming up on News2Day in less than 10 minutes time.

Caitriona Perry is in studio 3. She did the camera angle with the desk behind her. It's likely that will stay with us for the intros of the Six-One which may last for the duration of the pandemic or it may be permanent because of the new presenter line-up unveiled on Monday.

The start of the intro was a bit muddled up as it was cut off a little straight into Studio 3.
JK
JKDerry 2 September 2020 8:18pm
Presentation wise, we are now well over a year and a half into the launch of the new look to Studio 3, and it has done very well indeed for RTE News. Anyone else agree?

For such a small studio, the design looks very good. RTE News presentation from Studio 3 of old was always a hit and miss in terms of how good it look on screen.

Their 1994 to 1997 attempt at a BBC News virtual studio look was really crap, even for 1994. The cut out and paste was so obvious, even more limited than the BBC News virtual studio had.
SE
seamus 3 September 2020 2:24pm
It really is very nice, after decades of somewhat feeble attempts to emulate the BBC - save for one moment of erm...originality (the ghastly brown news set of 2006) 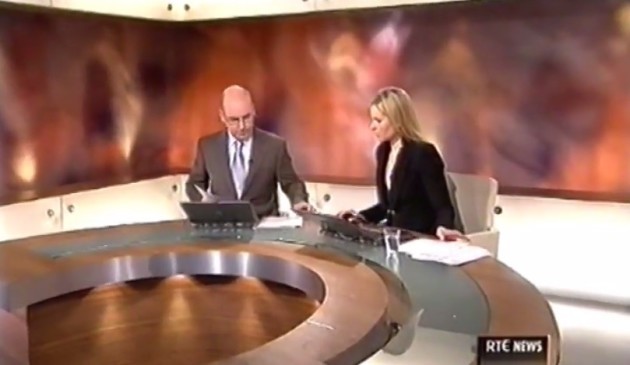 I'm not a huge fan of virtual newsroom backdrops but it really is one of Lightwell's best efforts.
Last edited by seamus on 3 September 2020 2:34pm - 3 times in total