About 1:55 into this clip you have Carol Barnes reading the Weather forecast out on News At One from 1985. (This clip itself is fascinating as it’s recorded from BFBS, who immediately close down after the News.)


I can't find it again, but somewhere there was a discussion on BFBS, describing the analogue Chalfont Latimer days, saying that BBC1, BBC2 and ITV were sourced off-air from Hannington.

Today BFBS carries multi-channel programme streams from BBC1, 2 ITV, Sky and BT Sport, Sky News and BFBS's own Forces TV. Its distributed worldwide by encrypted DVB_S/S2 over BFBS's own transponder leases. BFBS has a technology to transcode DVB_S to DVB_T which is then broadcast in areas where the British Forces are serving, including Mount Pleasant Airfield, and did have DVB_T into camps occupied in Helmand.

The point is that isn't all of this an MPEG4 code in SD, so the UK source woukld have to be something other than MPEG2 off-air?

Can anyone remember the Christmas Promo ITN made with Fiona Armstrong and Sue Carpenter. It was basically advertising the fact ITN would be with us right throughout the Christmas and New Year period. Have spent hours trying find it.
ST
Stuart West Country (West) Spotlight 5 June 2020 1:09pm
Newsroom posted:
Here's a beauty! Pamela Armstrong with the late news on Christmas Day complete with special Christmas closer

Considering that ITN had such a boring title 'sequence' (a dodgy caption card overlaid on the video of the top story), that ending is quite remarkable with the rotating 3D ITN logo.

Last edited by Stuart on 5 June 2020 1:15pm
HC
Hatton Cross Central (West) Midlands Today 5 June 2020 1:51pm
Of interest to us Radio geeks is the voice-over in the Pegasus travel agency advert.
An outing for James Whale, if I'm not mistaken (who may still have been on Metro Radio at this time)
What's great is it's possible to hear in the delivery that it may have been the last one of the recording session, given how he obviously ramping up the emphasis on some works, and the end tag is made to sound deliberatly smug as though he is taking the perverbial out of the whole advertisement voicer.
Readers are warned that this post contains some flash photography
IT
itsrobert Founding member Granada North West Today 11 June 2020 6:23pm
Quite a rare example of a full bulletin presented by Anya Sitaram has recently been posted:

I know we've said this before but I just love the whole product here. What a simple but effective design. And I love the no-nonsense start to the bulletin. A quick sting, a VO and straight into the headlines. All done and dusted in 30 seconds.

VMPhil Granada North West Today 11 June 2020 6:42pm
And Clive James afterwards. Take me back!
IT
itsrobert Founding member Granada North West Today 11 June 2020 6:48pm
The top story is somewhat amusing in 2020. The thought of a minister resigning over an extra-marital affair. Isn't that almost par for the course these days? People wouldn't bat an eyelid about that now - politicians can openly lie nowadays and keep their job!
CI
cityprod West Country (West) Spotlight 12 June 2020 3:26am
itsrobert posted:
Quite a rare example of a full bulletin presented by Anya Sitaram has recently been posted:

I know we've said this before but I just love the whole product here. What a simple but effective design. And I love the no-nonsense start to the bulletin. A quick sting, a VO and straight into the headlines. All done and dusted in 30 seconds.


Next to the late 1980s weekend/overnight news look, this is my next favourite, a look that would later be reused for the ITN News Channel. It's as you say, simple but effective, no nonsense, the only thing I don't care for about this is the lack of a title sequence, but other than that, it's pretty near perfect.

Newsroom 12 June 2020 2:24pm
I've a question for itsrobert. Would you have idea when they replaced the newsroom desks. The first one was very awkward and they'd have to slot in a piece at the weekends to accommodate the sports presenter. During the weekdays, the presenter on the EEN would sit in the gap so as to alternate between atrium and newsroom shots. 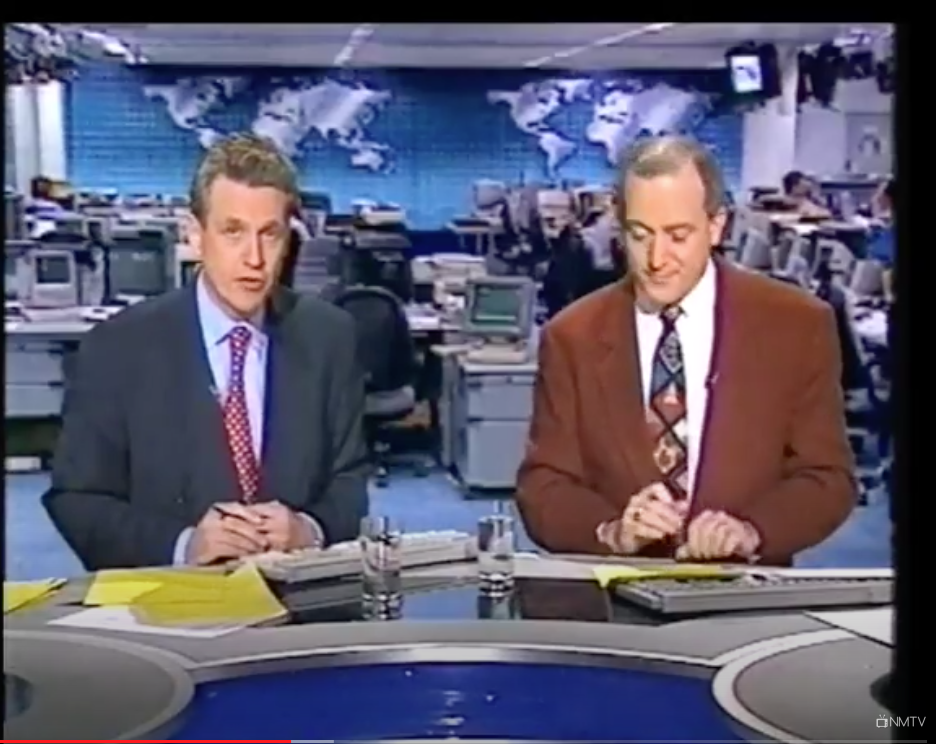 IT
itsrobert Founding member Granada North West Today 12 June 2020 6:26pm
I think that desk changed some time during 1993. And I wouldn't be at all surprised if it happened when they moved Studio 3 down a floor (from the first to ground floor).
CI
cityprod West Country (West) Spotlight 15 June 2020 9:42pm
Interesting video which features a full edition of the ITN World News from 1996 airing on a US public television station.