Previous Next
MI
TheMike Central (East) East Midlands Today 9 June 2020 9:25am
London Lite posted:
Considering Pick and Challenge are shown on some Swiss cable/IPTV networks, I wouldn't be surprised if they do a similar thing where viewers watching FTA on satellite have alternative programming on Pick unless Sky come up with an alternative solution for UK Freesat users.

As Swiss networks happily extract channels from the UK spotbeam, I doubt any changes will be done to accommodate them. However, Swiss networks are obligated to compensate rights holders in such instances.
KE
kernow 11 June 2020 8:44pm
2 new channels, Pick HD and Pick Alternate, have been added to Digiguide, with listings from 19th June.

They currently have exactly the same schedule.
VA
valley 11 June 2020 9:41pm
TheMike posted:
Back in 2013, when Pick last showed live football (as part of a Sky spoiler when BT Sport launched), Pick on satellite carred a sport free schedule, while the action continued on the Freeview version.


Didn't Pick also show Game for Grenfell in 2017 (alongside Sky One)?

Yes it did, although there were no rights issues for that game.
VA
valley 11 June 2020 10:34pm
TheMike posted:
valley posted:
TheMike posted:
Back in 2013, when Pick last showed live football (as part of a Sky spoiler when BT Sport launched), Pick on satellite carred a sport free schedule, while the action continued on the Freeview version.


Didn't Pick also show Game for Grenfell in 2017 (alongside Sky One)?

Yes it did, although there were no rights issues for that game.


Yes I suppose not.

They currently have exactly the same schedule.
Presumably Alternate is a version not showing the football?

Almost certainly given that Pick is FTA on a transponder that - with the same signal strength - covers all of France, half of Germany, as well large parts of Spain and Portugal. (It'll be fairly easy to receive further than this with a bigger dish.) So the Premier League - and the rights holders in those countries - wouldn't be delighted if there were 25 FTA games available, whatever the circumstances may be.


The BBC will be fine because their transponders have a spot beam very tightly focused on the UK & Ireland. They do overspill into Northern France and Belgium, but the signal strength drops off very rapidly after that. The Premier League will be aware of this already, and the BBC only having four games - and low choice ones at that - making it a very different issue to the 25 Pick will show, amongst them some of the highest profile matches.
RR
RR 12 June 2020 9:23am
I do know, from a while ago, and not the current contract, that the League charged more for a bid that would put games on satellite free to air, and as a result, the bids were not free to air.

However, we are now about the government trying to increase the free to air matches, the League will be allowing those to be free to Sky (and the BBC). I suspect this will only be the case until we can go back to normal.
RD
rdd Founding member 12 June 2020 11:03am
One interesting point about this is what is happening with Premier Sports ROI games. Quite clearly, they won’t have their pick of the 3pms any more as there’s only one game on Saturdays at 3pm and all games are being shown by Sky/BT/Amazon. The obvious solution would seem to have been to give them the BBC and Amazon games in exchange for having to give up the 3pms, and while sure enough the first BBC game (Bournemouth v Palace) is going to be on Premier, they are also listing the Brighton v Arsenal game at 3pm the same day (which is on BT) as well as two of the four 6pm KOs on June 24th, one of which is on the BBC and the other on Sky Sports & Pick. Sky Sports have never blocked any live sport in Ireland (and it is many years since BT have done so) so it’ll be interesting to see what happens there.
MI
TheMike Central (East) East Midlands Today 12 June 2020 3:02pm
For reference, Astra 2E European footprint coverage: 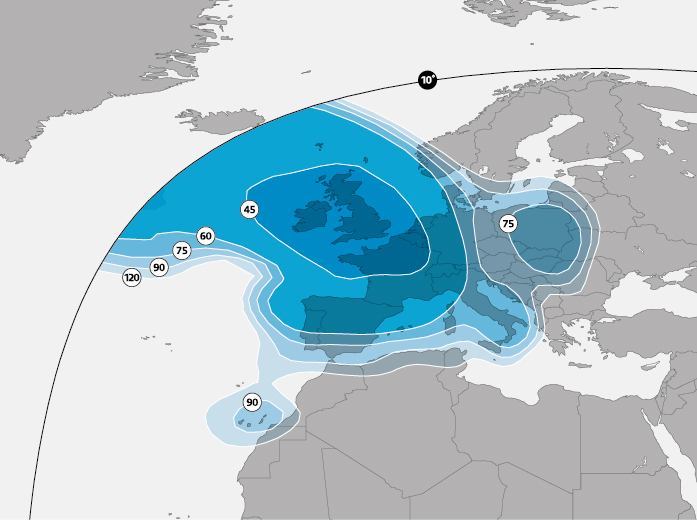 Image from the operator of the satellite, SES. Numbers are dish sizes in cm.
IM
ImMaxClaydon London Look East (West sub-opt) 12 June 2020 3:41pm
Is there a Pick HD channel? Is it on Sky/do I need to manually tune it?