Mouseboy33 21 May 2020 1:58pm
plymouthbloke1974 posted:
Interesting that Time Warner have absolutely nothing to do with CNN Brasil other than essentially doing a Branson and leasing out the name to a “Third Party”....

Well I wouldnt say they have "absolutely nothing" to do with the channel. I think its more than just a licensing a logo and a name. “CNN does a comprehensive audit of all its licensing partners. This is the case of the licensees who will operate CNN Brasil, who have our full support. As with all licensing agreements, CNN Brasil will program the channel independently, but in line with CNN standards and practices. ” A press release noted that the 24-hour news channel will have total editorial independence, as well as the rights to rebroadcast CNN’s non-Portuguese language content.
There is some CNN International programming that does air on the channel. Such as Amanpour. Also CNN Brasil Bureau and Editor, Shasta Darlington is apparently working within the CNN Brasil offices. So maybe saying it has "absolutely nothing" to do with the channel might be overstating just a bit.

Aside from the music, this channel is closely aligned with the look and feel of the main CNN channels. On the launch they had a cool little video that showed CNN's Wolf Blitzer sending CNN Brasil a CNN Microphone being shipped across Brasil to their headquarters and them opening the box on the set at their Sau Paulo HQ. Kinda like a nice welcome to the family segment.


Last edited by Mouseboy33 on 21 May 2020 2:04pm
I'm here to give you something to talk about! You're Welcome.
https://youtu.be/1g18oiI2WIU
GI
ginnyfan World News 21 May 2020 4:55pm
I guess those of us who are European viewers should really be thankful CNN's trash prime time line up is overnight. 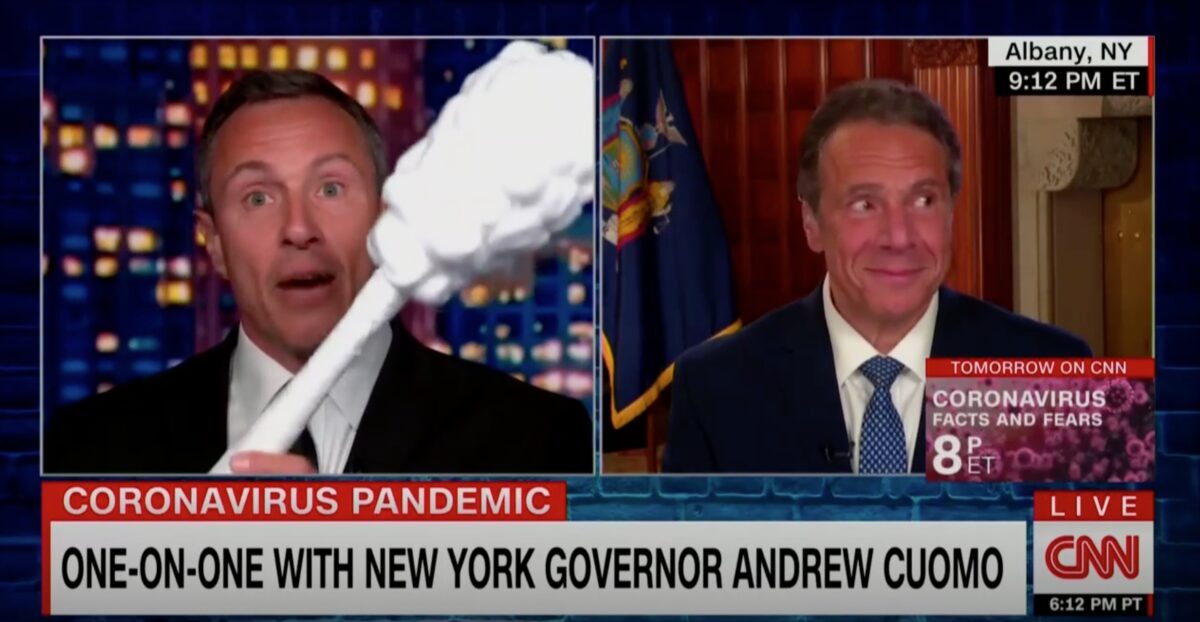 where to upload high resolution photos

https://www.mediaite.com/tv/conservatives-slam-chris-cuomos-shameless-nasal-swab-gag-during-coronavirus-interview/
BF
BFGArmy Channel Channel Islands 21 May 2020 5:42pm
He doesn't seem to particularly value his gig at CNN either judging by his comments in an interview recently.

If he doesn't want his CNN gig, they could surely give it to someone else- like the excellent Brianna Keilar who is far too good to be hidden away in daytime.

And that photo is just embarassing-bringing out props like it's SMTV. If anybody wants to discredit CNN in future all they have to do is bring out that photo and they'd have a pretty strong case.
You do get the sense some anchors on the Domestic aside (and the odd name on International) almost think and act like they are the news. Cuomo & Lemon are two that instantly spring to mind.
Last edited by BFGArmy on 21 May 2020 6:00pm
GI
ginnyfan World News 21 May 2020 6:12pm
Well Cuomo is now CNN's ratings gold and we'll see even more of him. He milked the whole COVID-19 to the max, with over the top stunts like his ''leaving basement'' episode and it brought him many new viewers.

Meanwhile there are reports he was seen outside while apparently sick and even having another confrontation with someone who called him out on it.
JK
JKDerry UTV Newsline 21 May 2020 7:44pm
Dear God, American news channels are truly appalling. Egos at the max with hosts having an arrogance the size of Westminster Abbey. How on earth does this drivel from CNN, MSNBC and FOX get ratings?
JO
johnnyboy Founding member Tyne Tees Look North (North East) 21 May 2020 9:52pm
The show titles on CNN are awful.

Erin Burnett Outfront - what the hell does that mean?
Anderson Cooper 360 - he reports the news from the same angle as the rest of the network
First Move with Julia Chatterley - what what?
The Lead with Jake Tapper - ???
The Situation Room with Wolf Blitzer - talking heads
Cuomo Prime Time - please!

I yearn for the older days of CNNI when it was a distinct international station. Is it me or has that virtually all gone now?
OFCOM's queen bitch
DK
DanielK STV Central Reporting Scotland 22 May 2020 1:02am
johnnyboy posted:
The show titles on CNN are awful.

Erin Burnett Outfront - what the hell does that mean?
Anderson Cooper 360 - he reports the news from the same angle as the rest of the network
First Move with Julia Chatterley - what what?
The Lead with Jake Tapper - ???
The Situation Room with Wolf Blitzer - talking heads
Cuomo Prime Time - please!

I yearn for the older days of CNNI when it was a distinct international station. Is it me or has that virtually all gone now?

Quote:
The show contains a "lead" for different subjects. They are the National, Political, Money, Buried, Sports, World, Pop, Tech, and Health leads.


from the show's wiki.

I assume First Move refers to its time slot? As does Prime Time. 360 had a quite innovative presentation when it started IIRC, but has become commonplace since then.
MA
Meridian AM Meridian (South) South Today 22 May 2020 4:29am
'First Move' refers to the 'first moves' (opening trade) of the day on the NYSE, that take place during the programme's air time.

Years ago, there used to be an equivalent programme, called 'Business International'. It aired in the mornings, when Europe's markets were opening. Now we don't have that - only 'First Move'.


There are some strange names for news bulletins.
'Your World Today' is a mouthful!
They all have the same news and general traditional format of the newsreader reading links into correspondent reports.


It is called "Connect the World" because at the start of the programme on 2009 they had a "connect line" at the top of the screen which showed different keywords of the featured stories. The press releases of that time said that the show "tries to link seemingly unrelated global stories by exploring the impact an event in one place can have on people elsewhere."

It has lost all the meaning a while ago through.
JO
johnnyboy Founding member Tyne Tees Look North (North East) 22 May 2020 9:40am
Thanks for the explanations, guys. I didn't know any of what you shared before.


Of course, Al Jazeera doesn't cover Anderson Cooper's new baby every night and You don't get the conversations between Cooper and Cuomo about how to massage the baby. You'll also miss out on Cuomo and Lemon Discussing Ties and how Cuomo Stole Lemon's black tie...