This site closed in March 2021 and is now a read-only archive
Previous Next
MO
Mouseboy33 19 March 2020 4:07pm
KCTV 5 CBS - Kansas City, MO/KS - This set debuted in December. This set is huge and layered and has lots of depth and layers.
The set features dark stained wood floor risers but also white stacked stone sections. With wide swathes of video walls and some low res LED panels behind the main anchor position and frosted panels and some clear perspex structures in the background. There are a series of wooden catwalks behind the anchor desk. Provided a plethora of shooting positions. The set is mainly a back wall and features no soffit along the back wall or any hanging features above the anchor desk. The back wall is ok and really that no offensive.
Even thought this set is large. The set seems to be cheaper because the back wall is basically a scenic scrim with blue lighting. Rather than being a 100% hard set. You will notice its a theatrical scrim. So it seems to be made up of some freestanding panels and a couple of separate walls that house the video walls themselves. Because of the immense side of KCTV studio they were able to make it as big as they wanted.

Where is all falls apart is the absolutely hideous, awful anchor desk. Its thick clunky and badly designed. Why some thought it was a good idea to have those boxes poking out the front in with the led display and then a wood striped box near the bottom, I will never understand. its just awful. 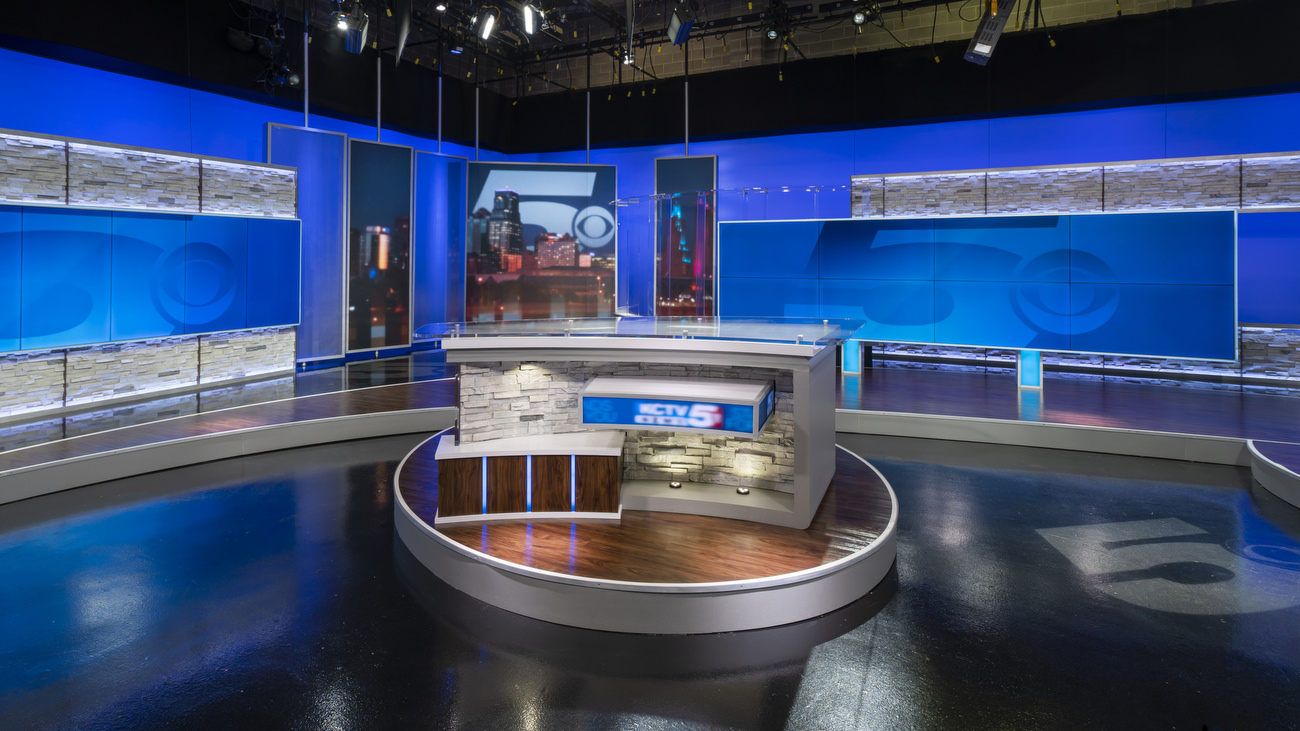 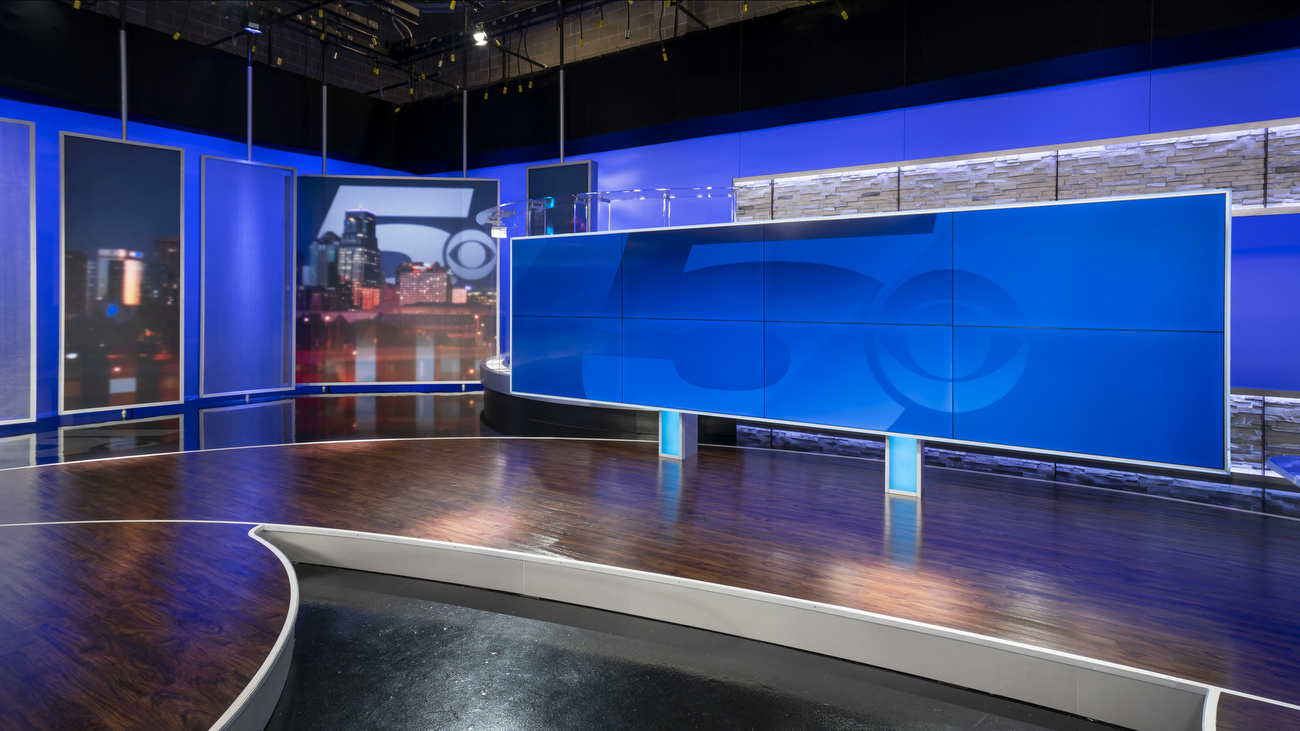 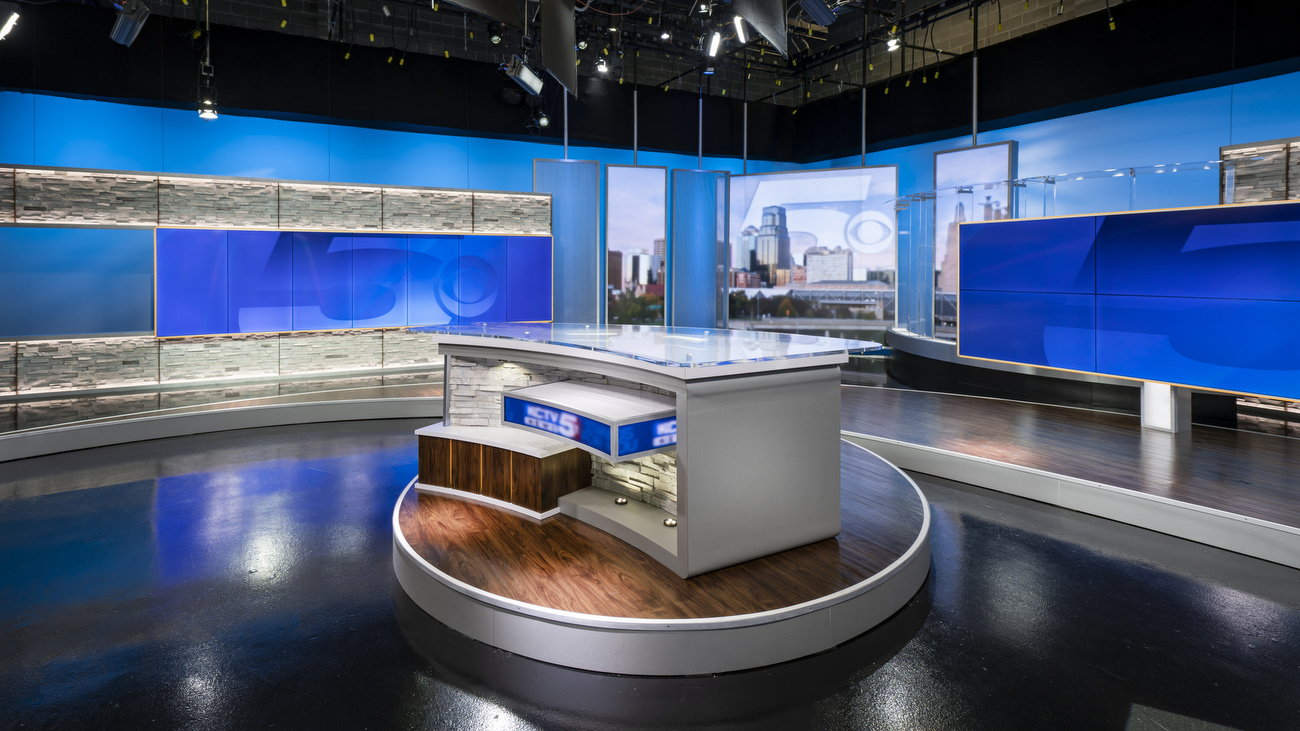 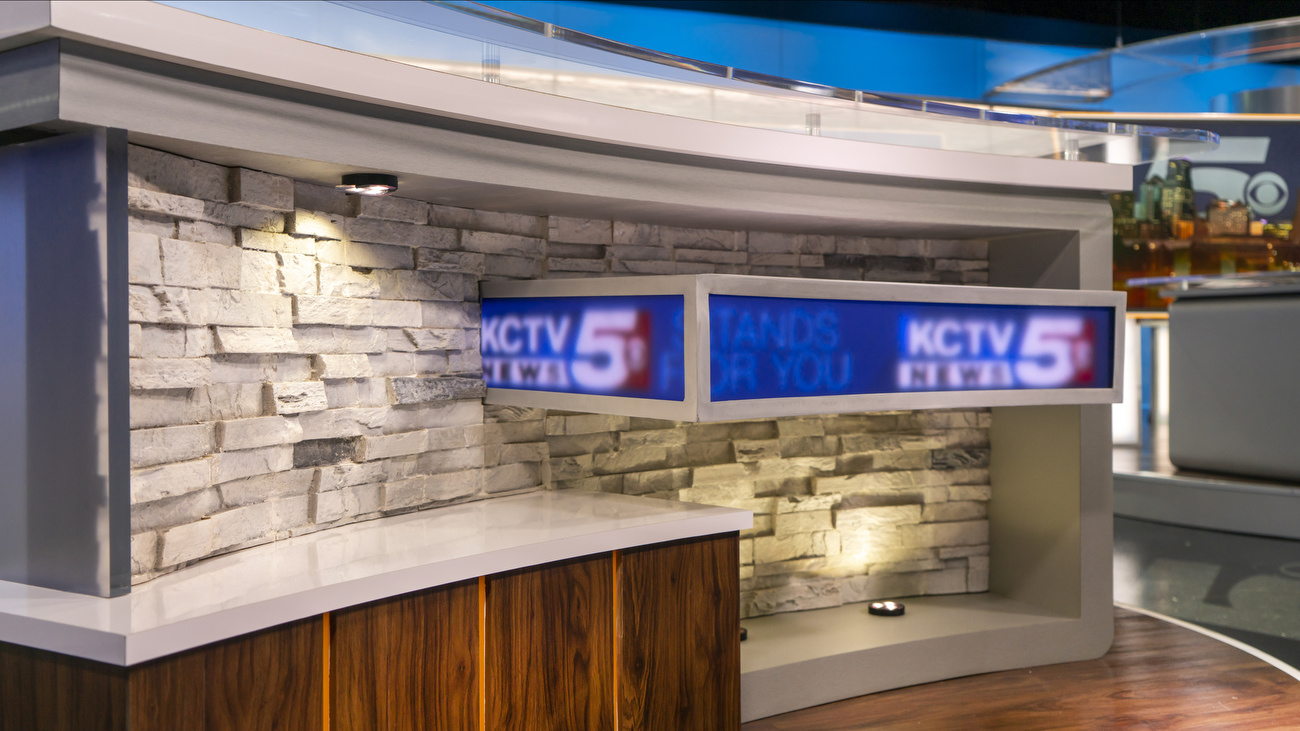 Weather Desk/Traffic/Updates
The set features an "expanded" weather area. The traffic desk likely will be used when they are in rolling coverage for severe weather. Its in Kansas which is in Tornado alley. So it will likely be used when this happens. The 3 pods are connected together by the wooden risers. 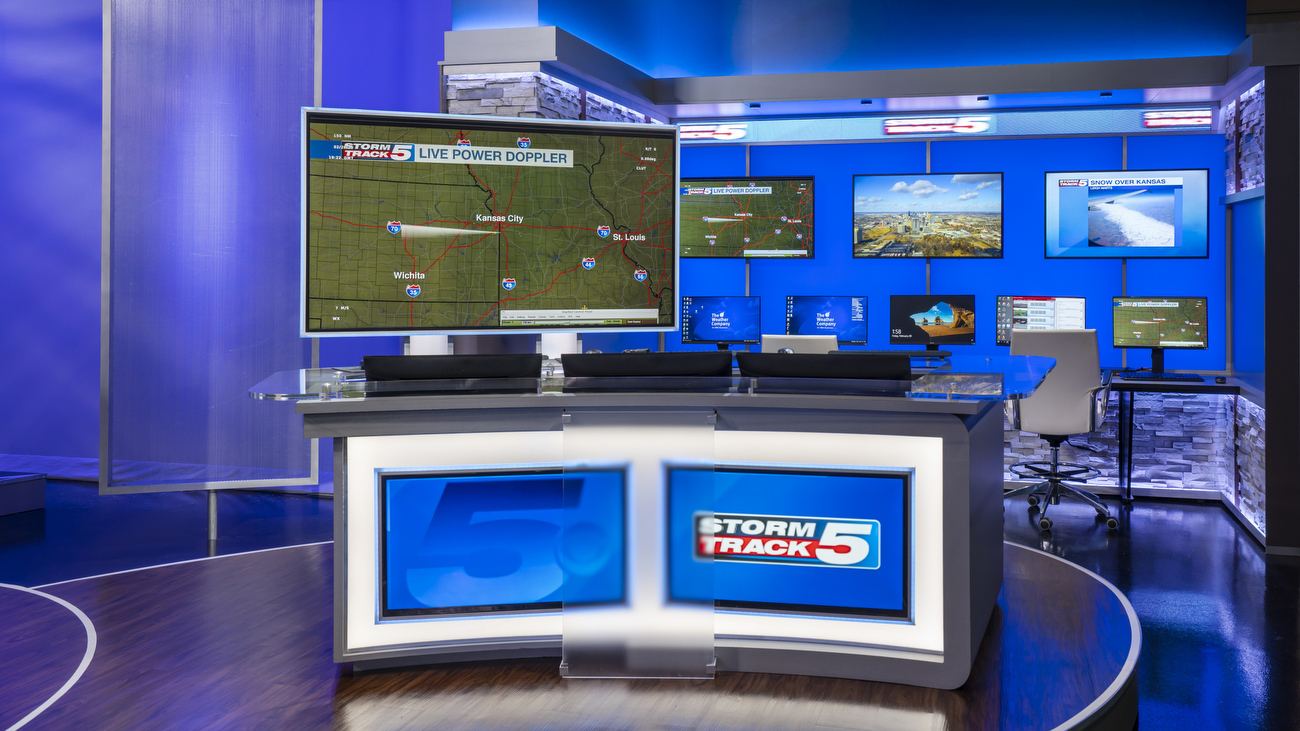 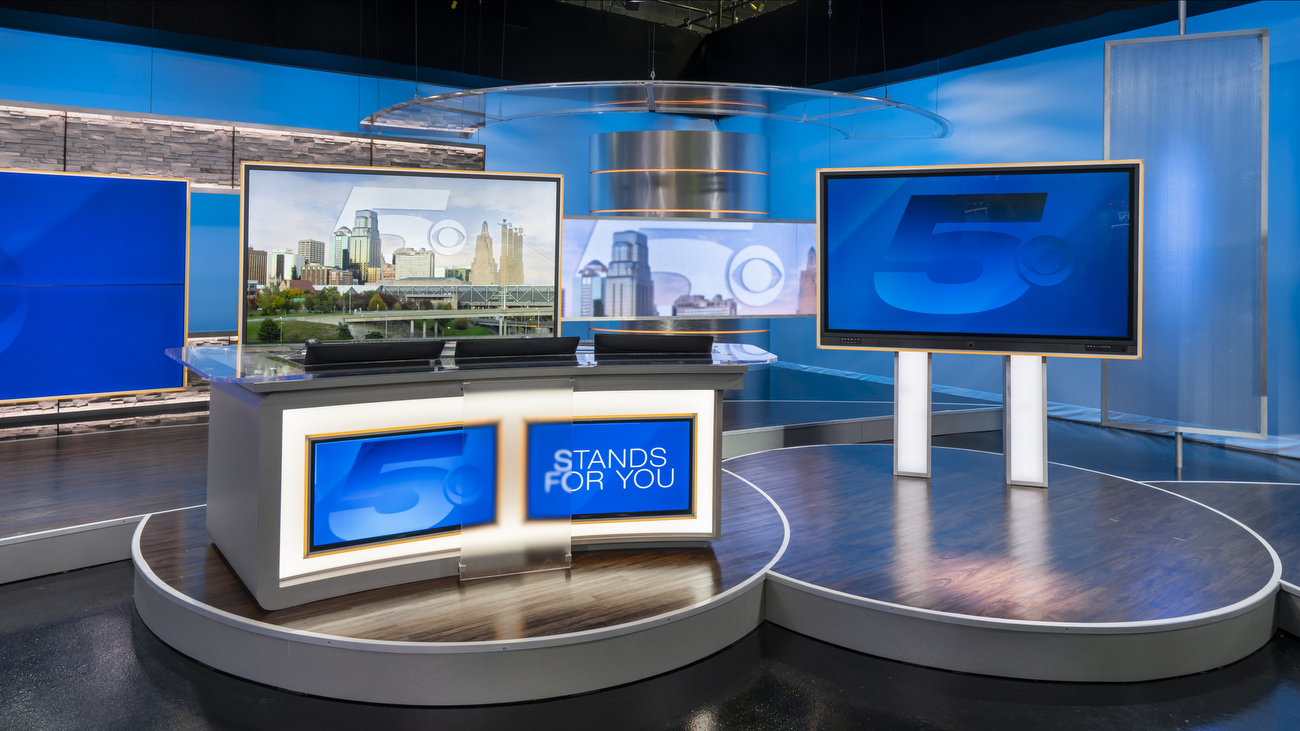 MO
Mouseboy33 29 March 2020 10:31pm
Spectrum News 1 - Wisconsin - 24 hr News Channel for the state of Wisconsin. Spectrum which is a pay-tv operator runs a collection of state wide news channels as well as the famous NY1 for NYC.
They have been rolling out new sets for all their channels. 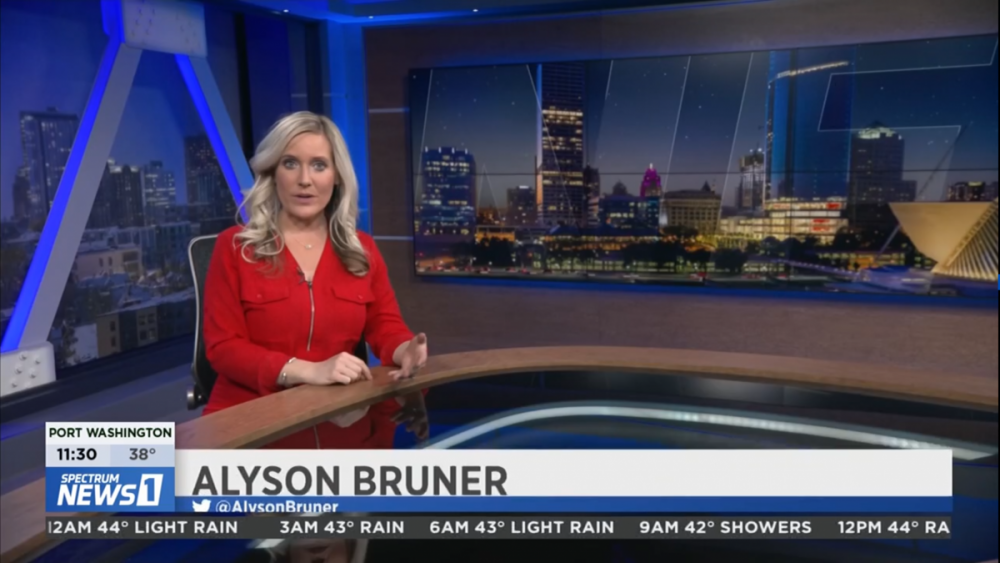 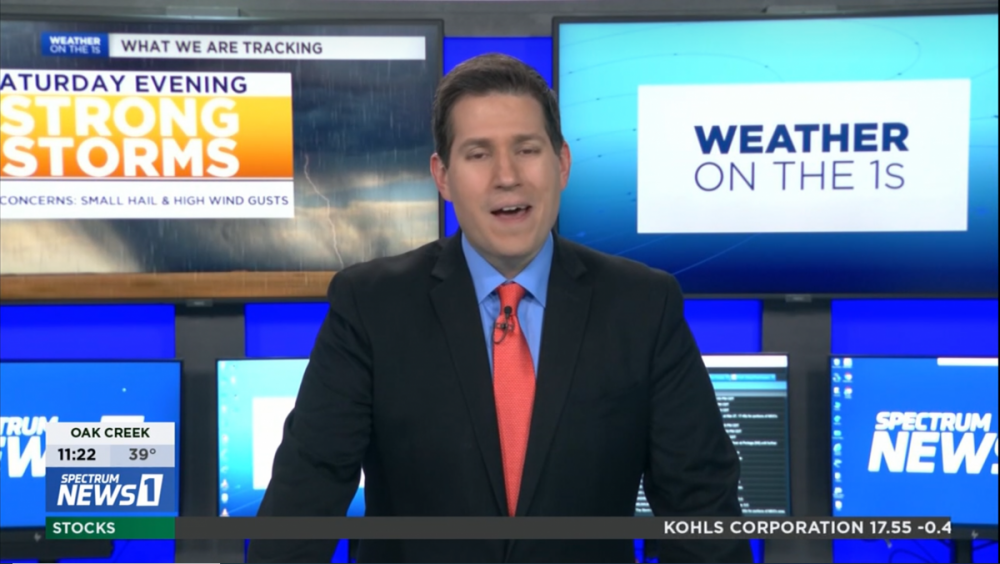 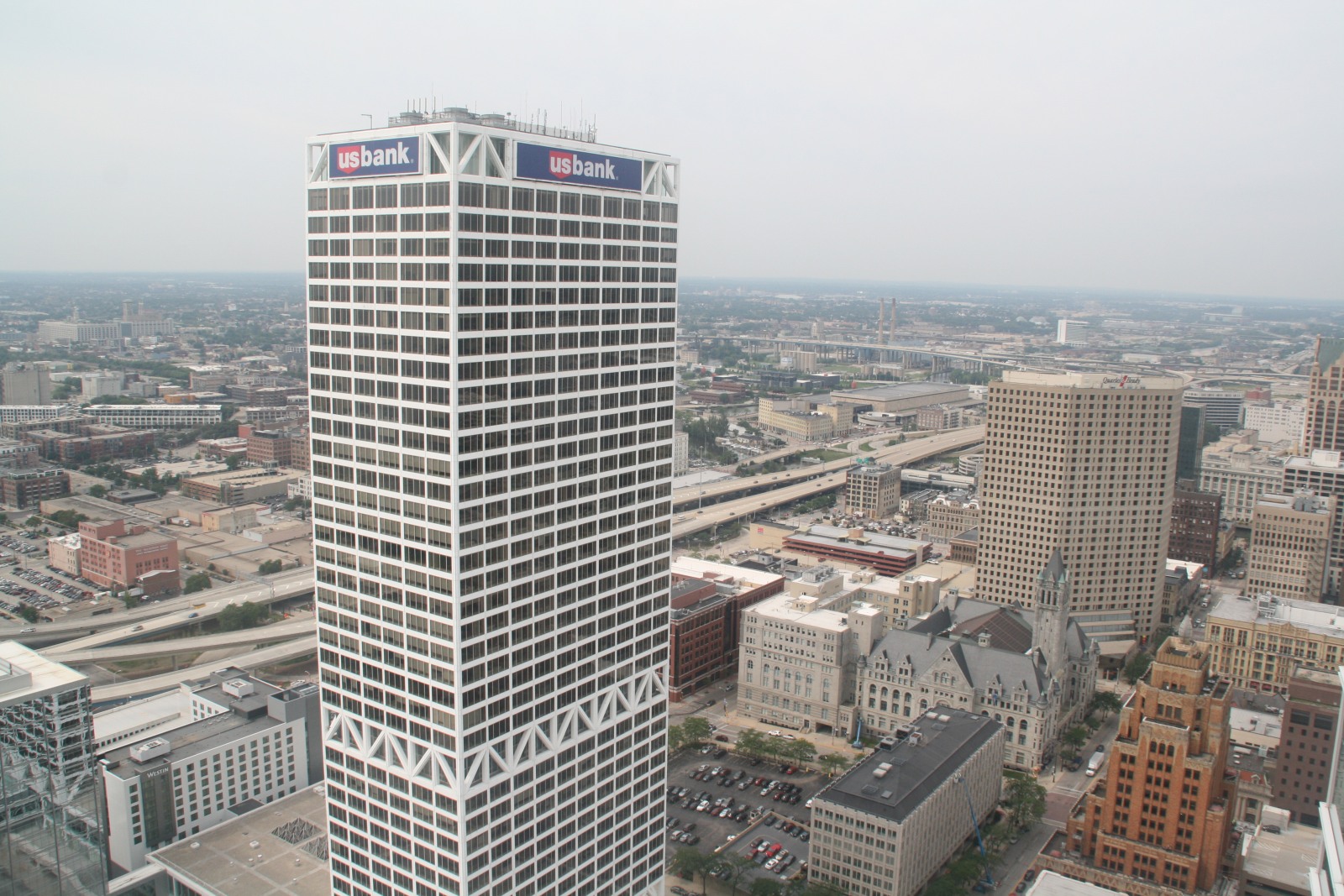 MO
Mouseboy33 16 August 2020 8:53pm
WOIO 9 CLEVELAND- I really like this set from BDI. It feels really modern. Thankfully no stone or dark wood. I love the desk. its certainly different from the typical desks we've seen recently. The set has layers and depth. Especially the standup areas to the sides. There are a few missed opportunities for texture lighting. But over all I find this a clean simple looks with out an over reliance on a video wall.
19News is trying to claw its way back from some previous missteps. The channel was able to create a ratings juggernaut in the 2000's with a tabloid slant (with a famous crash zoom double shot to the anchors) that was very successful and quickly became #1 in Cleveland and then a shift happened when there was a management change and they changed the focus and the logo from red to a yellow and cornflower blue version and dropped the action news title and the ratings suffered. Now they are trying to backtrack in the last couple of years. 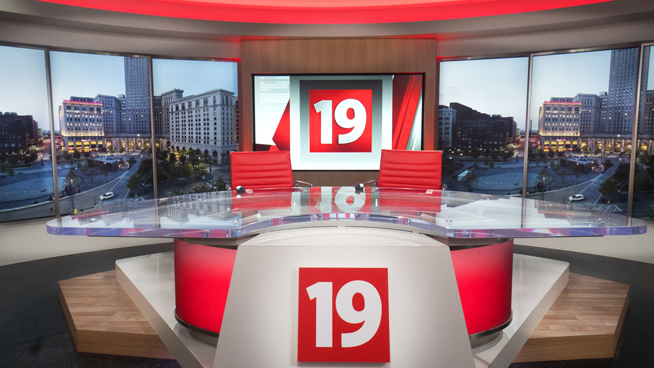 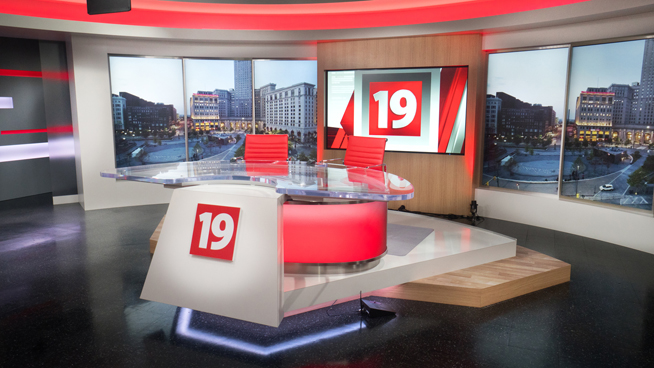 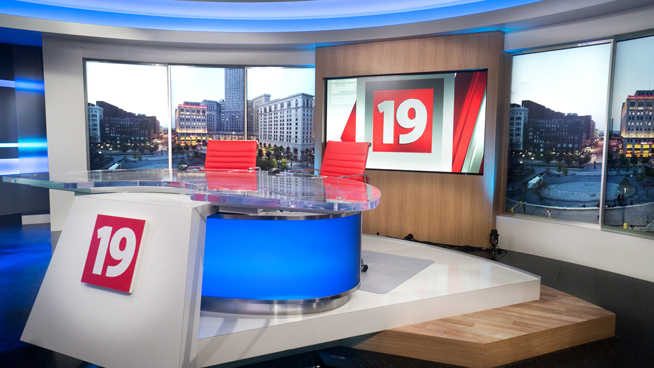 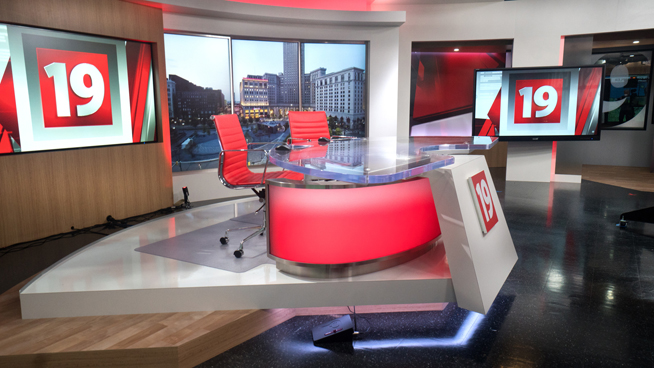 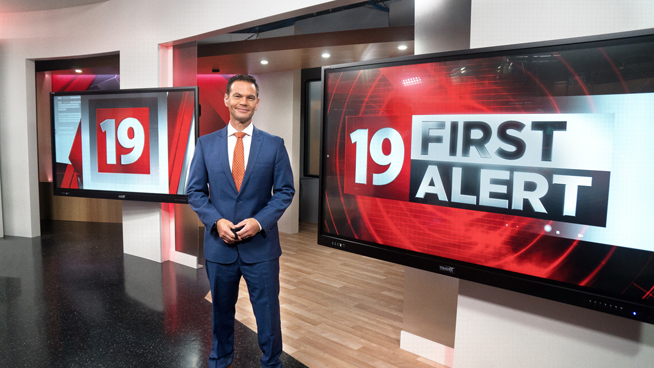 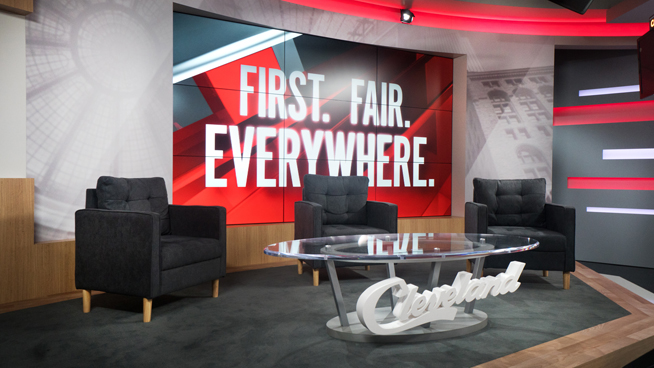 Watch the progression of opens and the return back to the red tabloid style and tagline. (someone really screwed up) At min 4:43 you can see the Action News era start after years of misteps and launches and merges with Ch43 news

MO
Mouseboy33 25 October 2020 9:34pm
KRON 4 - San Francisco
Independent tv station and station tenant of KGO7 (The ABC O&O) just debut a new set featuring huge video "window" with views of the bridges that cross the Bay. Not a bad design and a major upgrade from their previous look. But the lighting unfortunately washes it out a bit.
Their signature colour is red 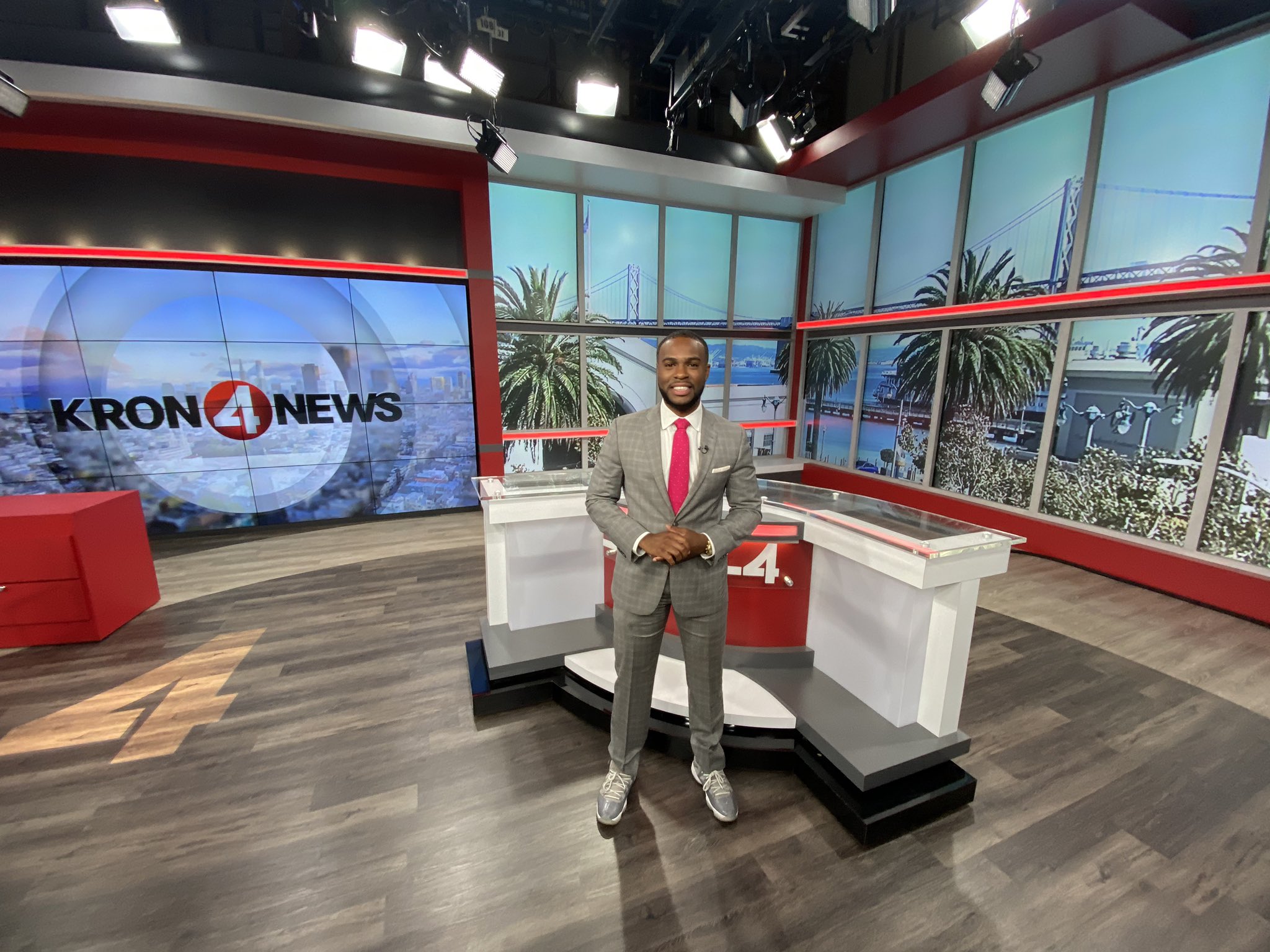 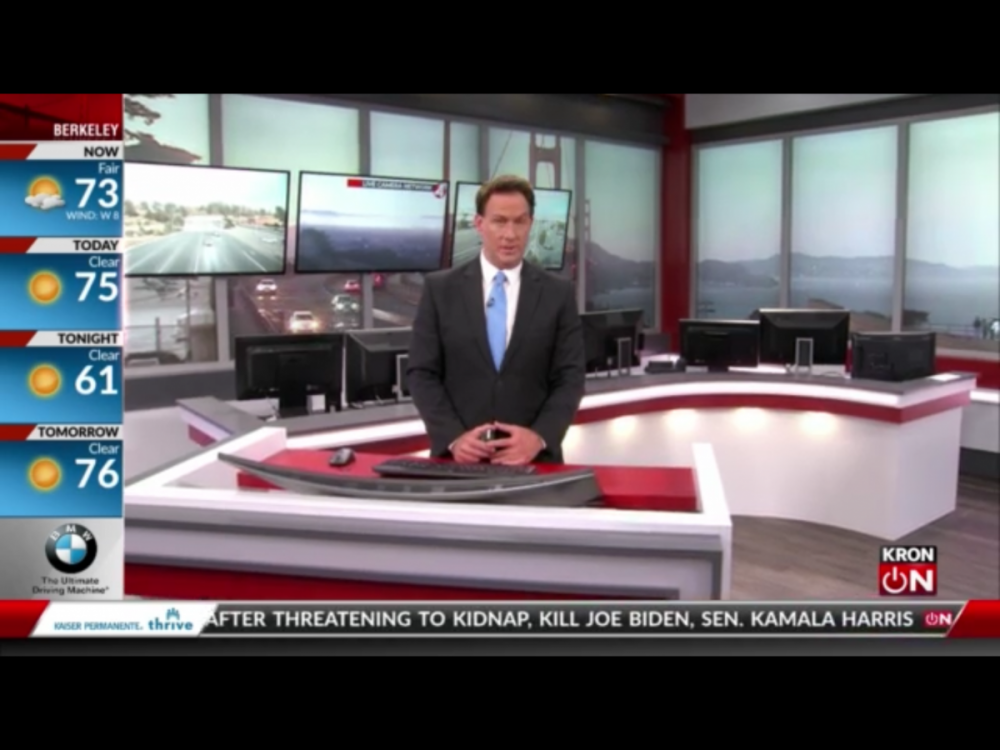 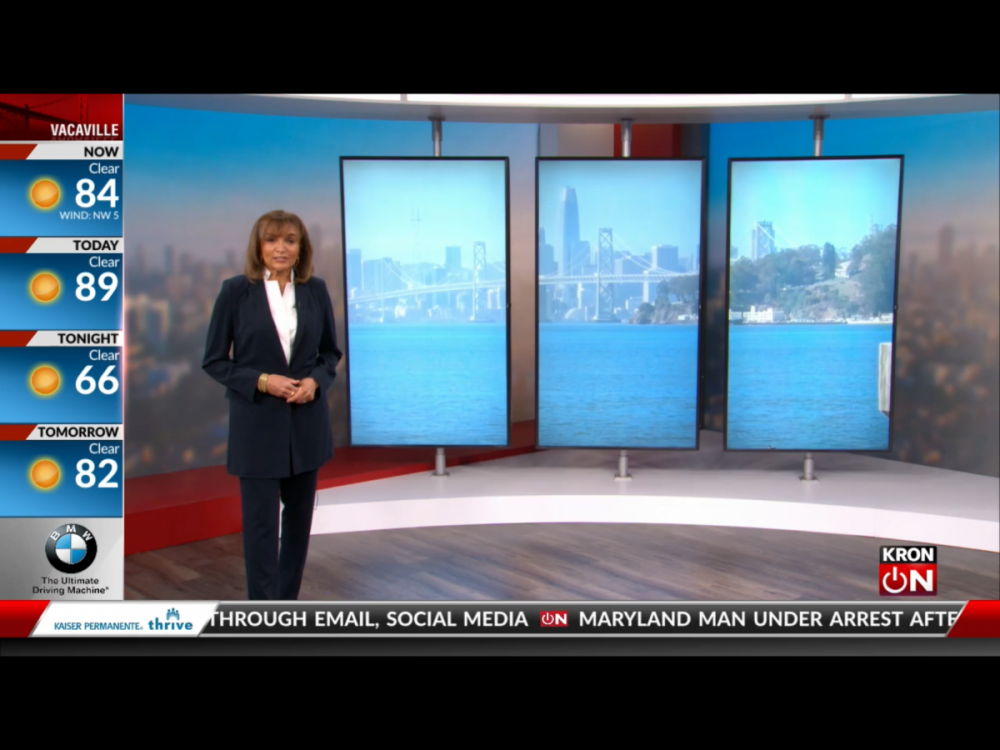 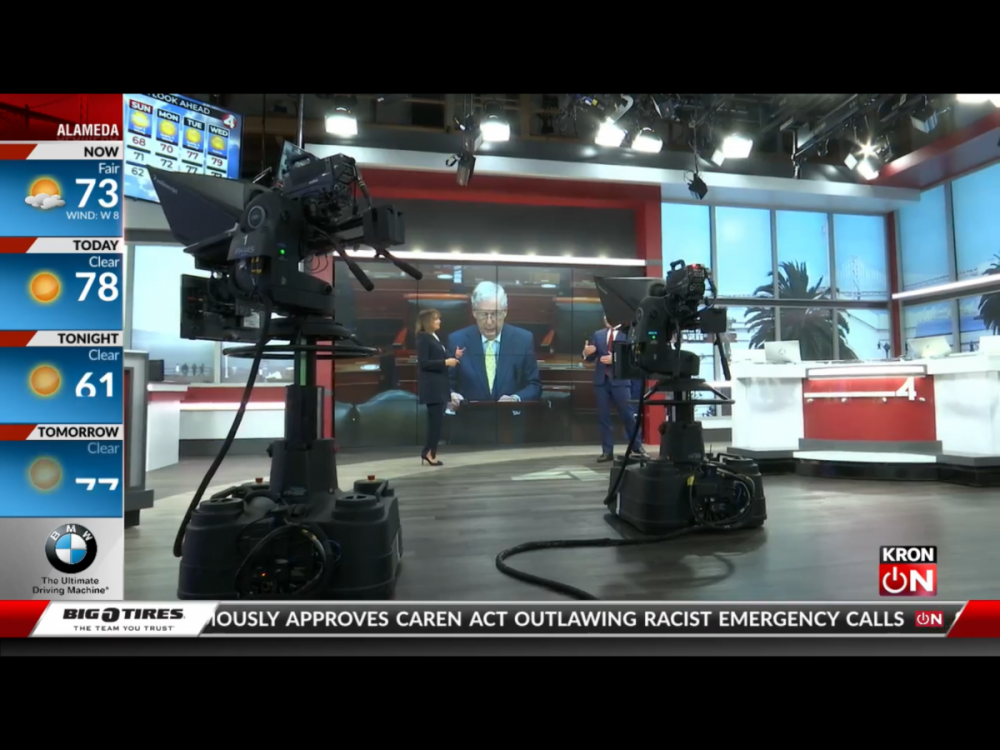 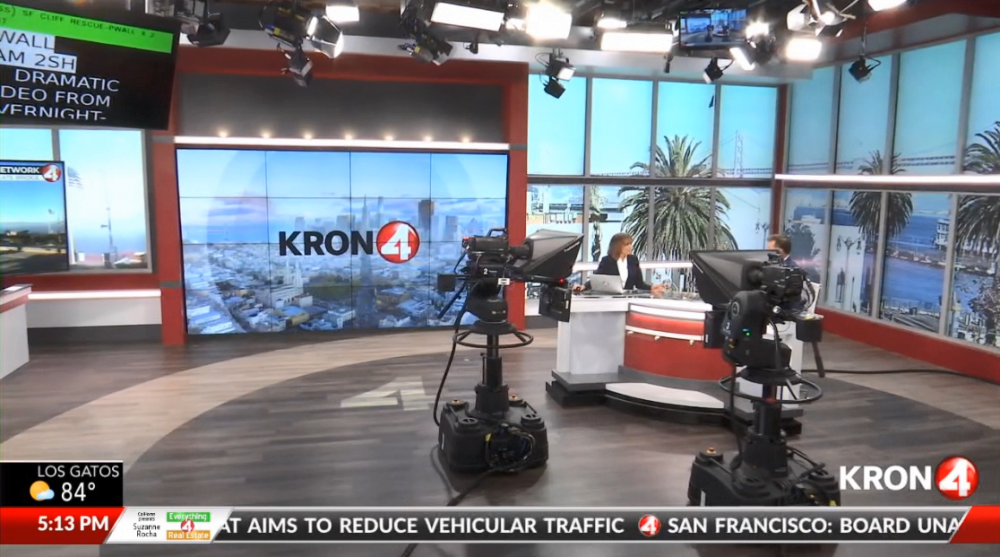 This set is almost similar to the set WFLA - Tampa receieved without other "bridge" elements and the staircase. 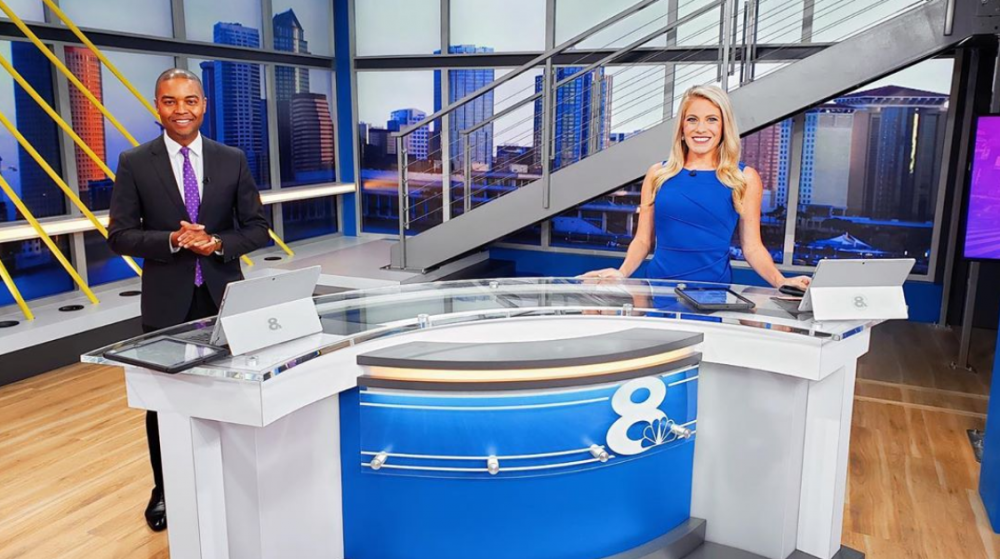 Last edited by Mouseboy33 on 25 October 2020 9:42pm
RK
Rkolsen 25 October 2020 11:29pm
Worth mentioning the stairs on WFLA are apparently functional and designed to reach the next floor.
MA
mark Founding member 26 October 2020 9:45am
That's a massive upgrade for KRON - their last set had a very small-market feel to it. Looks like they just need to fiddle with the settings on the screens behind the desk so they don't look so saturated.

A shame they haven't improved the graphics at the same time. Hopefully that will happen before too long.
RK
Rkolsen 26 October 2020 10:29am
One thing about KRON is that although they sublease space from KGO-TV they have a separate physical plant. However they despite physical plants being separate they get a feed of KGO’s helicopter with Sky 7 graphic burnt in, I would like to know if the agreement also includes things like Sky Cams. It wouldn’t make sense to have two separate cameras on the roof if they’re just going to shoot the same images.
MA
mark Founding member 27 October 2020 3:06pm
I've been watching a bit of KRON's morning news today and I have to say that, once the sun is up, the set looks gorgeous. I've seen similar views across the Embarcadero to the Bay Bridge on other stations, but KRON's use of it feels a cut above the rest.

Probably one of my favourite new sets in recent years.
MO
Mouseboy33 27 October 2020 5:41pm
Yeah it does look good, the theme and new lower third font is a downgrade. Im not sure why they changed it. Probably the theme change came down to money.
Here was the previous theme, it felt more "important sounding and was timed with the graphics and Im not sure who though that light font was a good idea. Also keep in mind that KRON 4 is no longer affiliated with any network, but was left with news department so they kept it going and shifted toward more news across the day. Apparently its been successful for them, because they have survived years after losing its affiliation with NBC (I think. That was a huge mess).

MO
Mouseboy33 29 October 2020 4:23pm
WHNT 19 Huntsville, AL - The city of Huntsville is one of the 4 main space and rocket aerospace industry cities in the US. Its not a huge city, but its mainly a tech-based, aerospace based economy and is poised to surpass long-time large city Birmingham to secure the top spot in Alabama as the largest city. This is definitely a massive upgrade for WHNT. The set is much bigger than anything in the entire state from what I've seen. Whilst i absolutely detest the stacked stone looked, the rest of the set is interesting. They added a huge 2 story video window and a large 2 section L-shaped video presenter wall. Weather viewing is a driver in Alabama as it sits in the very active Dixie Alley (the southeast's version of Tornado Alley), so was a bit surprised by how lackluster the weather centre seemed. Though they did include a huge CSO wall off to the side of the weather centre. and it features 2 huge desks that take up one entire side of the set. They can have a team of people in there. The old desk was tiny. So its an upgrade. It will be interesting to see it being used for rolling coverage during a tornado outbreak in late Nov and in the spring.
Overall its a bit dark. I think this would be more impressive had they not gone with the brown stacked stone look and the floor tone. Makes it feel almost barn like. But for Alabama, especially Huntsville a set of this size is wild. Also considering that the big affiliates in Birmingham dont even close to this in size and scale. Nexstar has been on set launch spree across the US in recent weeks since the launch of NewsNation.


Here is the previous they just donated to a local university for reference. 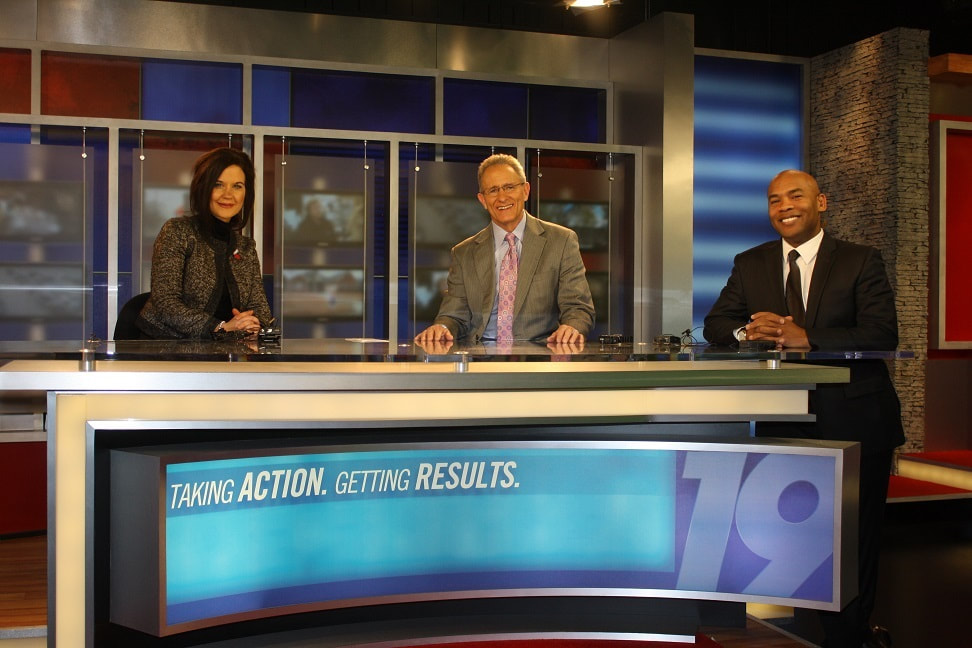 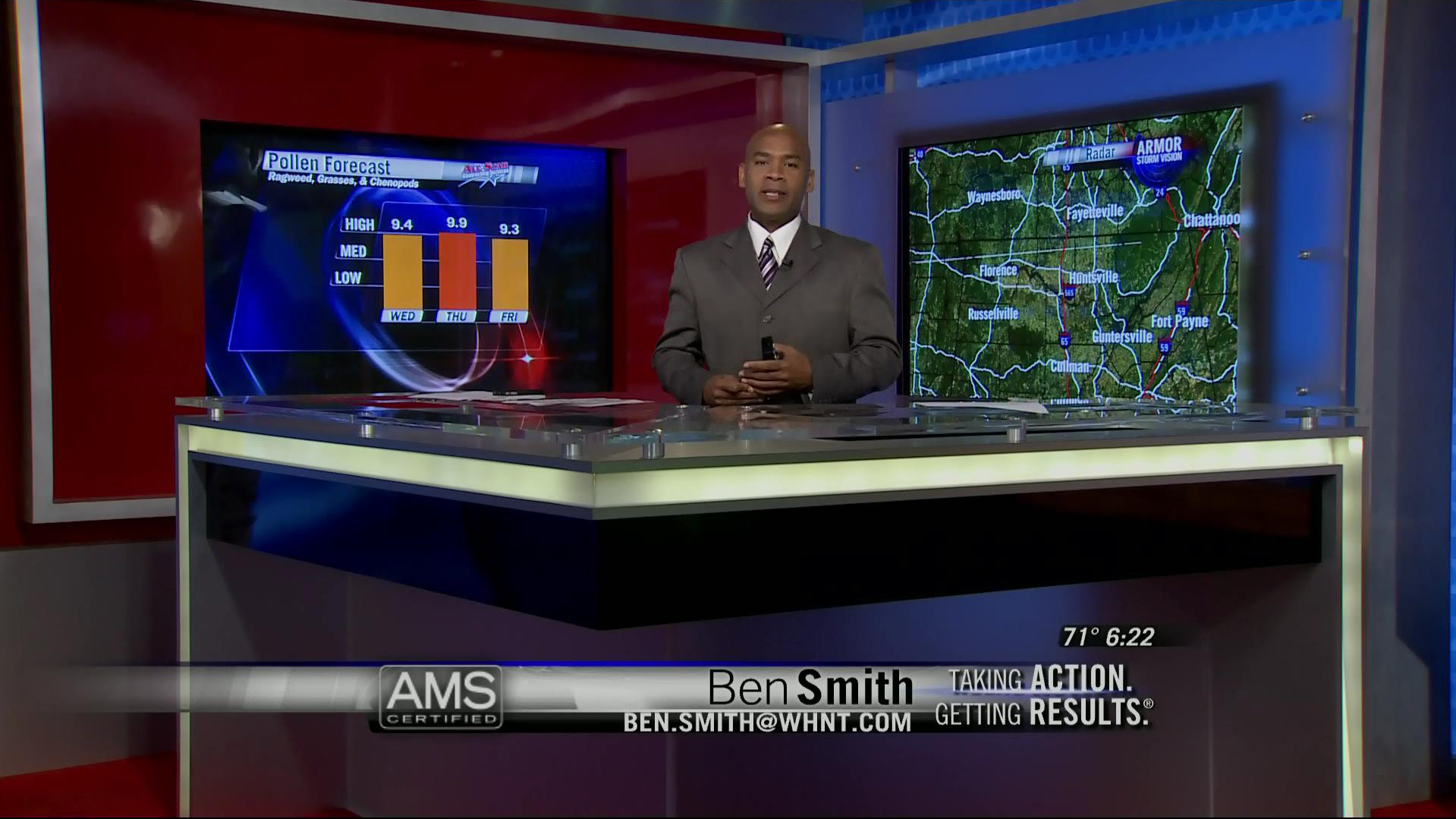