Bringing the best from TV-am and RetroRerun into one thread.

Some days you just can't get rid of a bomb.


And for comparison, here is a modern take on 'how he would handle the bomb': 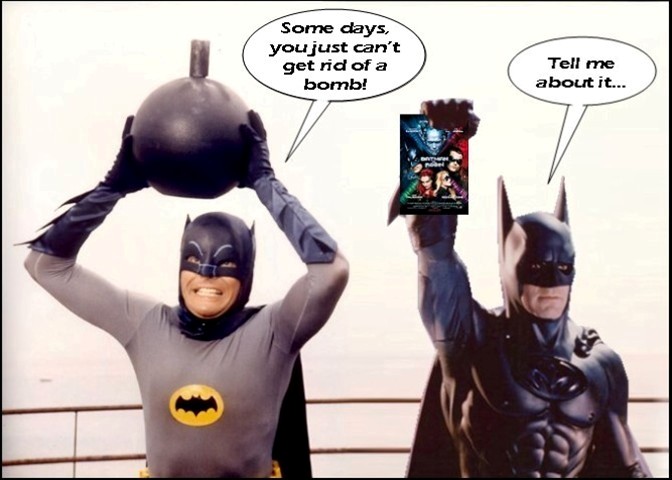 CI
cityprod West Country (West) Spotlight 27 December 2019 11:14pm
Neil Jones posted:
In the 1960s television series, Batman was a far less dark character and a lot more camp, with the much-missed Adam West in the title role, assisted by Burt Ward as his trusty sidekick, Robin – both of them in costumes made of fabric, not rubber muscles. It was very much a beautifully crafted piece of theatre, with wonderfully hammy performances, hilariously terrible puns and iconic music.

Twitter user, YUXLOA, shared a clip from the series in which Bruce Wayne has to do some quick thinking, and Adam West has to do some sharp acting – which he did. Enjoy.

No actor should ever be cast as Batman unless they ace this scene in a screen test which then gets leaked online. Indeed, all former Batmen ought to record their own versions. https://t.co/KdBhEMcJkM


(text from The Poke)


If memory serves, that's from the final story of Season 2, Ice Spy/The Duo Defy, and it remains one of my favourite moments in the whole Adam West Batman catalogue, or should that be, Bat-alogue, because of his voice work there.

james-2001 Central (East) East Midlands Today 28 December 2019 12:12am
Let's be honest, the whole concept behind Batman (and, to be honest, many comics) is quite ridiculous, so I always like the parody/pisstake/light-heartedness of the 60s batman, it fits the implausability of the whole idea. I always find it a bit unfortunate that the modern idea seems to be that comic book superheroes (and villains) have to be treated deadly seriously and with the utmost reverance.

Though they make billions at the box office, so what do I know?
NJ
Neil Jones Founding member Central (West) Midlands Today 28 December 2019 9:55am
I may be unique but I don't quite "get" the modern trend for modern superhero film productions, particularly the so-called "Marvel Universe", I find them all incredibly stodgy and boring. But again this stuff takes a fortune at the box office so I sometimes wonder if I'm missing something...?
BR
Brekkie Wales Wales Today 28 December 2019 11:19am
Completely agree - just don't get it at all. From the little I've seen they are really poor.
Stay Local. Stay Safe. Stay Alive.

London Lite Founding member London London 28 December 2019 5:28pm
Neil Jones posted:
I may be unique but I don't quite "get" the modern trend for modern superhero film productions, particularly the so-called "Marvel Universe", I find them all incredibly stodgy and boring. But again this stuff takes a fortune at the box office so I sometimes wonder if I'm missing something...?


Maybe this is why I like the Deadpool character who is sardonic. The seriousness of other superhero characters can be too much.
AN
all new Phil Yorkshire Look North (Yorkshire) 29 December 2019 3:32pm
I think the more recent Batman / Dark Knight films get it right (the whole dystopian near-future feels just about plausible) but I totally agree on the Marvel series. People go mad for it though.

james-2001 Central (East) East Midlands Today 29 December 2019 11:36pm
The dreadful Lion King remake made well over a billion, there's no accounting for taste at the box office these days.

This was the view flying over the snow-capped Andes.... on my way to Lima pic.twitter.com/PLO8wVmKAX

Steve in Pudsey Yorkshire Look North (Yorkshire) 20 January 2020 9:17pm
Seems like a small part of the TVS Archive has been liberated

Write that down in your copybook now.