Previous Next
JA
jay Founding member London London 3 December 2019 7:16am
Sky has just announced its intention to build a huge new 32-acre studio complex in Elstree, in conjunction with NBCUniversal. 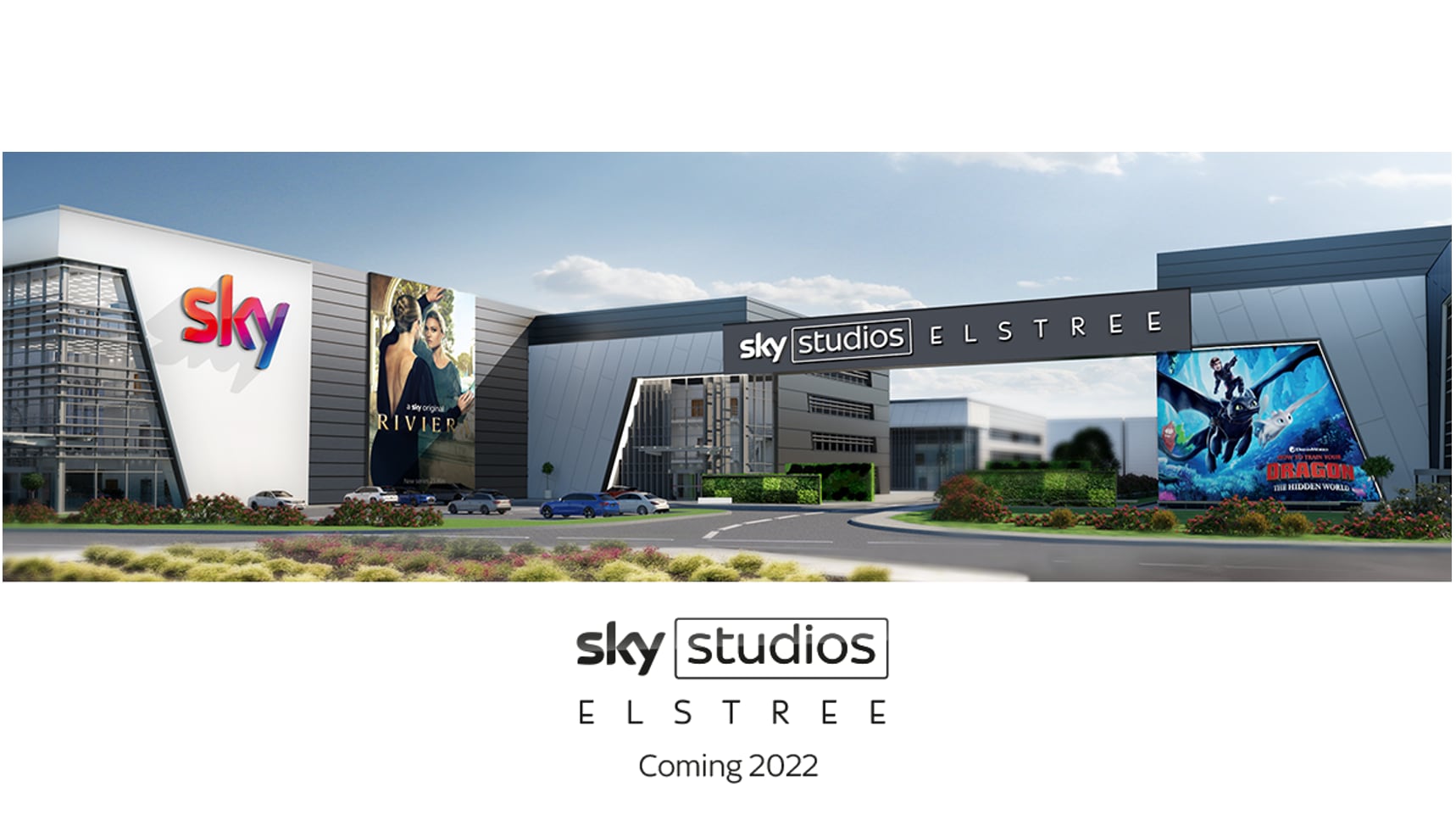 Sky announces its intention to invest in building a new 32-acre, state-of-the-art TV and film studio at Elstree, just north of London, home to the world-renowned Elstree Studios. The proposed development represents a significant new investment in the UK and European creative economy and will be made with the backing of Sky’s new owner Comcast and in partnership with sister-company NBCUniversal. Legal & General will develop its site and provide financing for the project.

In a huge boost to Britain’s creative sector, the new Sky Studios Elstree will:

- lead to the creation of over 2000 new jobs and help fuel the local economy
- generate an additional £3 billion of production investment in the UK’s creative economy over the first five years of operation, from Sky, NBCUniversal and other producers
- house 14 sound stages and become a new home for the best of British and European creative talent

Subject to planning consent the 32-acre development is expected to open in 2022 and will be able to facilitate the production of several films and TV shows simultaneously, with each of the 14 sound stages covering over 20,000 sqft. Once complete, the site will include production offices, a set construction workshop, a screening cinema and state-of-the-art post-production and digital facilities.

Sky is also committed to supporting the next generation of young and diverse creative talent and will use Sky Studios Elstree to build on its existing work.

The creation of Sky Studios Elstree will provide a new home for Britain’s flourishing creative sector and much needed space for Europe’s brightest talent. It will provide significant capacity for Sky Studios to produce more original content in-house, while continuing to work with independent production companies across Europe.

The new studio space will also play host to major film productions from Universal Pictures, Focus Features and Working Title, and television series from NBCUniversal Content Studios. It will also have capacity to host productions from third party producers.

Sky Studios Elstree will be situated in the borough of Hertsmere. Legal & General are in the process of finalising a detailed design of the scheme and expect to submit a formal planning application early next year.

Sky Studios Elstree will work in close collaboration with Elstree Studios despite both businesses being managed independently of each other.

Jeremy Darroch, Group Chief Executive, Sky, said: “Sky Studios Elstree will play a pivotal role in bringing the wealth of UK and European talent and creativity to the world. We know our customers love our award-winning Sky Originals like Chernobyl and our investment in Sky Studios Elstree will enable us to bring more unique stories to more viewers. We are proud to be working with our colleagues at NBCUniversal and Comcast, and our partners Hertsmere Borough Council and L&G to bring this project to life. Together we share a joint vision to create a world-leading production capability that will support the creation of thousands of jobs in the creative sector. We can’t wait to get started.”

Sajida Bijle, Interim Managing Director of Hertsmere Borough Council, said: “Hertsmere Borough Council is delighted by this announcement. This presents a fantastic opportunity to strengthen our creative industries in Hertsmere and build on our proud film and television heritage in the Borough. This scheme would bring significant employment opportunities to the region and put Elstree firmly on the global stage, whilst further enhancing our local film tourism. There will be opportunities for people to see the plans and to comment on the proposals once a formal planning application is submitted.”

Nigel Wilson, CEO of Legal & General Group, said: “The UK is a great place to invest. Growing at twice the speed of the economy as a whole and accounting for over two million jobs, our creative industries are a key component of Britain’s bright future. This investment is a great match for backing our UK pension promises. Sky, NBCUniversal and Comcast are global leaders in entertainment which will bring the best out of the UK’s amazing pool of talent. L&G is thrilled to be playing a supporting role in this major production.”

Roger Morris, Managing Director, Elstree Studios, said: “Sky Studios Elstree will be of immense importance to the UK Film and Television industry – it will not only boost the local economy of Hertsmere and Hertfordshire, but will also have a major impact on the UK’s creative sector as a whole. We are extremely proud that Sky Studios Elstree has chosen to locate near us and we look forward to working closely with them.”

Sky Studios Elstree will be located at Rowley Lane, just a short walk from Elstree Studios

Last edited by jay on 3 December 2019 7:40pm
jay
HA
harshy Founding member 3 December 2019 7:56am
Shouldn’t they be concentrating on making Sky Q the best platform ever, all in 4K UHD HLG HDR first...
CO
commseng London London 3 December 2019 8:14am
Interesting.
Does this suggest a move out of Osterley, or would that continue to run as it is with Elstree as a seperate production area?


I doubt the Sky Q development team will be building the studios. I’m sure they can both be worked on at the same time.

dosxuk Yorkshire Look North (Yorkshire) 3 December 2019 8:39am
commseng posted:
Interesting.
Does this suggest a move out of Osterley, or would that continue to run as it is with Elstree as a seperate production area?

Markymark Meridian (Thames Valley) South Today 3 December 2019 9:12am
dosxuk posted:
commseng posted:
Interesting.
Does this suggest a move out of Osterley, or would that continue to run as it is with Elstree as a seperate production area?

Well that's good news for some of us!
NJ
Neil Jones Founding member Central (West) Midlands Today 3 December 2019 11:13am
Hmm, I wonder if ITV are regretting selling Lenton Lane back in 2004, that plot of land was massive for its time but compared to this project was only half the size. Could have probably done something with that, though I appreciate ITV had their reasons at the time for getting rid of it, seemingly as it cost a fortune and then some more to run and sat empty a lot of the time.

Having look at the initial picture, it looks very similar to what you see as the studios in The Simpsons - Krustylu Studios, home of the Krusty the Clown show.
RD
rdd Founding member 3 December 2019 11:59am
dosxuk posted:


Was that ever really going to happen though? Comcast isn’t used (any more) as a customer facing brand even in the US - it’s Xfinity for the carriage play and NBCUniversal for the content play.
BC
Blake Connolly Founding member London London 3 December 2019 12:49pm
Feels perhaps like a reaction to the long-term deals Netflix has done with Shepperton and Disney with Pinewood, with those companies virtually taking over those studios for their productions. As it says, Universal, Working Title and Focus Features films will be shot there as well as Sky and NBCU productions, interesting that it's wholeheartedly getting the Sky branding.
HC
Hatton Cross Central (West) Midlands Today 3 December 2019 3:00pm
But where in Elstree?
Unless L&G own the Elstree Way industrial estate to the west of the current Elstree Studios and knock it down, its going to be a pretty sizable chunk of green fields swallowed by Sky/Comcast.
Readers are warned that this post contains some flash photography
MR
mromega Tyne Tees Look North (North East) 3 December 2019 3:54pm
It's greenfield on Rowley Lane. Obviously all still has to go through planning, but assumption would be that they have secured the land.