Top of the Pops

This site closed in March 2021 and is now a read-only archive
Previous Next
SW
Steve Williams 2 November 2019 5:38pm
As Broadcast points out, the 9pm episode of Pops last Friday was the second most-watched music show on TV. 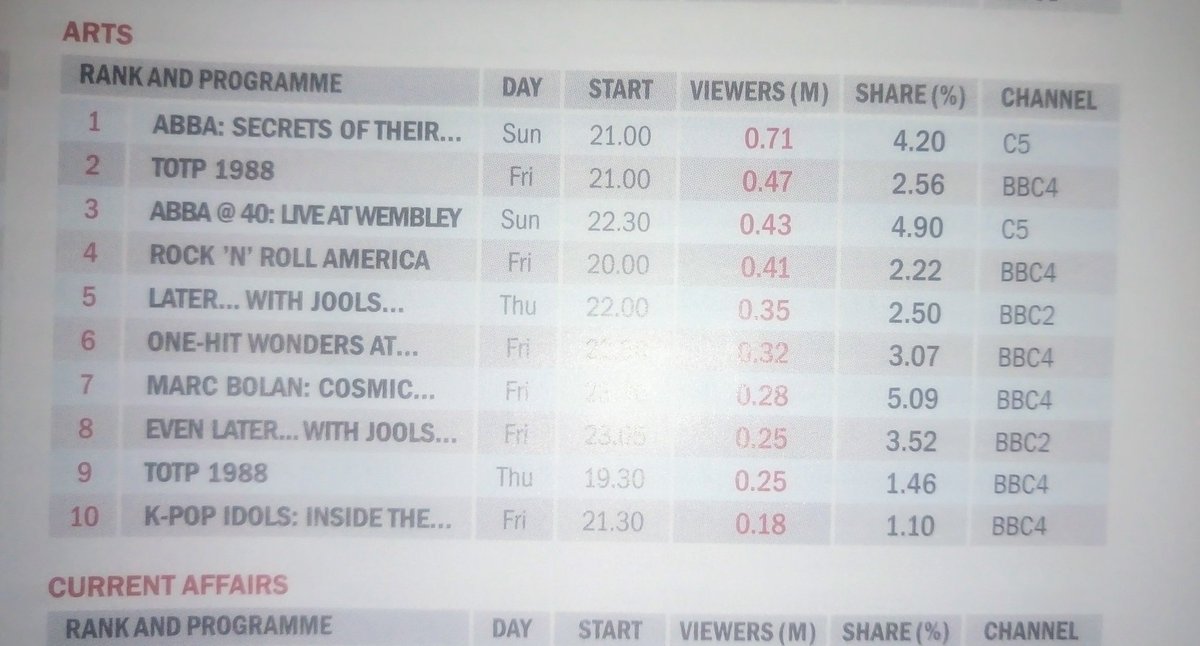 That rating also puts it at number 20 in the multichannel chart, ahead of Family Guy and just 100k behind Taskmaster. Don't think C4 will be poaching this, though.
CO
commseng 3 November 2019 9:23am
james-2001 posted:
Steve Williams posted:

We've mentioned "live via satellite" before, because to create more of a sense of occasion during the recording they would always do the show as-live, and that included going over to the satellite at the exact point of the programme, rather than just recording it separately and slotting it in during the edit. Probably wouldn't get away with that these days what with safeguarding trust.


Still doesn't explain the strange situation with them introducing what were obviously music videos as "live via satellite" though! I guess it's possible they were being played into Elstree via satellite rather than them having been sent the tapes, but they were still clearly not in any way live.

I was involved with a "Live via Satellite" video.
TOTP had gone stereo, and the Spice Girls first song was in the charts, and they were in Japan.
They did record a video for it, but in those days stereo via satellite was not an option, so the audio was sent via ISDN into LBH, and the video into TVC. The audio was delayed to match and sent to TVC.
It took a few goes to get it in sync, and went out the following day "Live"........
JA
james-2001 4 November 2019 11:55pm
Another Friday double bill on the 22nd November for the 4th week in a row (there's no TOTP episode on Thursday 21st, though the schedule on the BBC4 website doesn't say what's on instead, or what's on at that time on Tuesday and Wednesday that week either, so it's probably another stripped series like Handmade in Bolton), looks like they're gearing up for these Friday doubles to become a more regular thing next year, with (hopefully) no episodes to skip in 1989 & 90.

Also Sybil Ruscoe's first episode that week, so clearly no problems with her, though going by Andy Crane being unaware his episodes were showing, apart from Mike Smith, presenters have no input over their episodes showing anyway.
JA
james-2001 7 November 2019 10:36pm
I notice Paul Ciani was back to being credited as producer on tonight's episode, he wasn't the director though, Tony Newman was, which is a name I've not seen on these repeats before.

Another thing I've noticed is since Paul Ciani took his break in August, the regular showing of the previous week's playout on the following weeks show has stopped. Presumably Appel and Whitehouse weren't as keen on it.
SW
Steve Williams 8 November 2019 8:49am
james-2001 posted:
I notice Paul Ciani was back to being credited as producer on tonight's episode, he wasn't the director though, Tony Newman was, which is a name I've not seen on these repeats before.

Another thing I've noticed is since Paul Ciani took his break in August, the regular showing of the previous week's playout on the following weeks show has stopped. Presumably Appel and Whitehouse weren't as keen on it.


Yes, it seems that Ciani doesn't consider the playout a proper showing but instead akin to a breaker, so it qualifies to be shown on the next programme, but Appel and Whitehouse don't. The other difference is that Ciani counts non-movers (apart from the number one) to be going down, so they don't qualify, but Appel and Whitehouse seemingly disagree. Hence The Loco-Motion got a second play while it was a non-mover at number two under Appel, and I remember I'm Too Sexy, which was at number two for six weeks, getting several plays in the summer of 1991 under Appel when presumably had Ciani still been around, it wouldn't.

As mentioned on another forum, as Ciani only produced and didn't direct this episode, he presumably wasn't very hands on. Genome bills Brian Whitehouse as producer for this episode (and Newman as the director) so presumably Whitehouse was unavailable for some reason and Ciani interrupted his break to return.

Tony Newman has appared in the credits before as production manager, this being the era in BBC light entertainment when it worked on military lines and you would start at the bottom and work your way up. In fact, he was the Tony who said "No!" when John Peel said "Sorry, can we do that again, Tony?" in the opening gag on one of the live episodes in 1983. As you can see in Genome he directed many light entertainment shows, most notably numerous episodes of Blankety Blank and Every Second Counts with Stan Appel as producer, and the final series of Crackerjack under Paul Ciani.


There's been a couple of episodes where we've heard general screaming during the charts for the next band. Perhaps it was just to liven it up because the line-up was so crap.
JA
james-2001 9 November 2019 2:17am
The BBC website have rather unusually now updated their listings right through to the 29th November, and it looks like there's yet another double bill that day, and no episode o Thursday 28th.

I'm starting to wonder if maybe we are going to get the 25th birthday episodes now, otherwise there's only 5 episodes left to spread throughout all of December. I have a copy of it, and it doesn't look like it would be THAT hard to edit Savile out, you'd have to remove the intro and the opening and closing links and truncate the opening titles (they showed most of them during the Story of 1988 anyway), but apart from that he doesn't appear elsewhere in the show- he even buggers off as soon as the closing link's finished so he's not even in the crowd during the closing Status Quo performance, unlike all the other presenters.

Either that or they may have restored one or both of the "mute link" editions (or discovered a complete broadcast tape of the 23/6/88 edition) to put on at the end of the year.
TI
TIGHazard 9 November 2019 9:22am
james-2001 posted:
The BBC website have rather unusually now updated their listings right through to the 29th November, and it looks like there's yet another double bill that day, and no episode o Thursday 28th.

I've noticed before that this seems to happen nearer christmas anyway, and after large press releases (which there was one for the election yesterday).

So a combination of the two has led to them releasing the listings for nearly the entire month now.
SW
Steve Williams 9 November 2019 2:14pm
james-2001 posted:
The BBC website have rather unusually now updated their listings right through to the 29th November, and it looks like there's yet another double bill that day, and no episode o Thursday 28th.


As we get close to Christmas, the schedules are created and released earlier - mostly for the benefit of TV listings magazines which go to press earlier.
:-(
A former member 10 November 2019 3:47pm
The member requested removal of this post
Last edited by A former member on 26 March 2021 5:05pm
AR
Argybargy 10 November 2019 5:31pm
Rich Tea posted:
The schedules for the re-runs of TOTP have become an absolute mess. I don't know if anyone here caught my post from a few days ago about the scheduling, which I ended up deleting after leaving it on here overnight as I thought it was just a bit too long in picking recent schedule choices apart.

Here's one point as an example;

This weeks edition of 6th October 1988 got three airings. Two on Thursday night and one on Saturday night. Yet the 13th October show from Thursday night did not get seen again, either later the same night or in the Saturday omnibus. The same happened last week when the 15th September edition got three airings but the 22nd September got just the one.

Odd that BBC4 are actively deciding to show three of one edition but just one of the other, rather than a couple of each show.

The beauty of these re-runs used to be the inspired scheduling certainty but it's all been lost for no obvious reason.

Wouldn't it be more enjoyable if next year during the 1989 shows we could actually get back to seeing one edition each week on Thursday night in sync with the calendar as we did for the first few years of the run. I can't see any reason why not. I'm not a fan of the speed cramming of TV shows as is now happening with TOTP1988 and really don't need two new shows in one night either.

But whatever the choices, let's at least have some element of broadcast scheduling consistency that's not giving us avid long time watchers of the past 8½ years the constant runaround that we are now being given.

For me personally, I'm just glad that we are still getting the TOTP reruns at all. I'm not actually all that bothered about how many times each edition is repeated or how many editions get shown each week. It's worth remembering that the reruns were dangerously close to being pulled altogether in late 2012 on the back of the Savile and DLT revelations. Let's continue to enjoy watching them while we still can.