Previous Next
MU
mulder 29 May 2019 7:57am
I had to reconstruct this from the still image and the audio as I couldn't grab the video from iPlayer. Somebody played a prank on the 6:56 opt during BBC Breakfast this morning:

Excuse the bandicam watermark - shows the opt and crash to BBC London.

Someone leaving something on a server by mistake or as a placeholder that's made it to air? Find it difficult to believe that the BBC Coding and Mux has been compromised, or even a local BBC gallery...
MU
mulder 29 May 2019 8:13am
I've just done exactly the same thing - https://www.youtube.com/watch?v=Va2Lt-Uw1N0

http://www.presheaven.co.uk
NJ
Neil Jones Founding member Central (West) Midlands Today 29 May 2019 8:14am
Could have been worse...

(I was going to embed the Max Headroom incident here but I can't find a video with a thumbnail that isn't as scary as hell for it, but we all know what I'm talking about with that)

Steve in Pudsey Yorkshire Look North (Yorkshire) 29 May 2019 8:36am
That's got to be something they were recording in the studio, and some device between the gallery and the opt switch has crashed and got stuck on that frame?
Write that down in your copybook now.
MU
mulder 29 May 2019 8:40am
Love how it looks on the front page 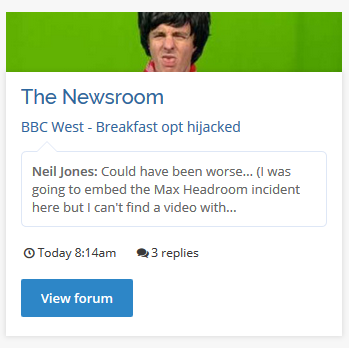 FanOfTV99 Granada North West Today 29 May 2019 12:51pm
Maybe the person on screen is also the Southern Television Hijacker who pretended to be Vrillon.
Stay Safe.

Spencer Yorkshire Look North (Yorkshire) 29 May 2019 1:28pm
FanOfTV99 posted:
Maybe the person on screen is also the Southern Television Hijacker who pretended to be Vrillon.

I was going to ask if it might be you, but spotted the different spelling.

Inspector Sands 29 May 2019 2:32pm
Going by what the newsreader says it wasn't a prank or a 'hijack' but some sort of bizarre fault.

It sounds like they knew there might have been an issue but gave it a try and then it was obvious that they weren't on air properly and gave up. Probably it was routed to line downstream of the gallery so they weren't seeing it in the gallery before hand

As to what it was and how come it went to air, no idea. Maybe it was something jokey recorded for a leaving tape or similar.
TJ
TedJrr Anglia (East) Look East 29 May 2019 3:27pm
Inspector Sands posted:
Going by what the newsreader says it wasn't a prank or a 'hijack' but some sort of bizarre fault. .


For a fault, its an awful parody of the subject of the lead story... the leader of Somerset County Council .