And Mein Kampf shows there's not exactly a lack of finger pointing from the family: 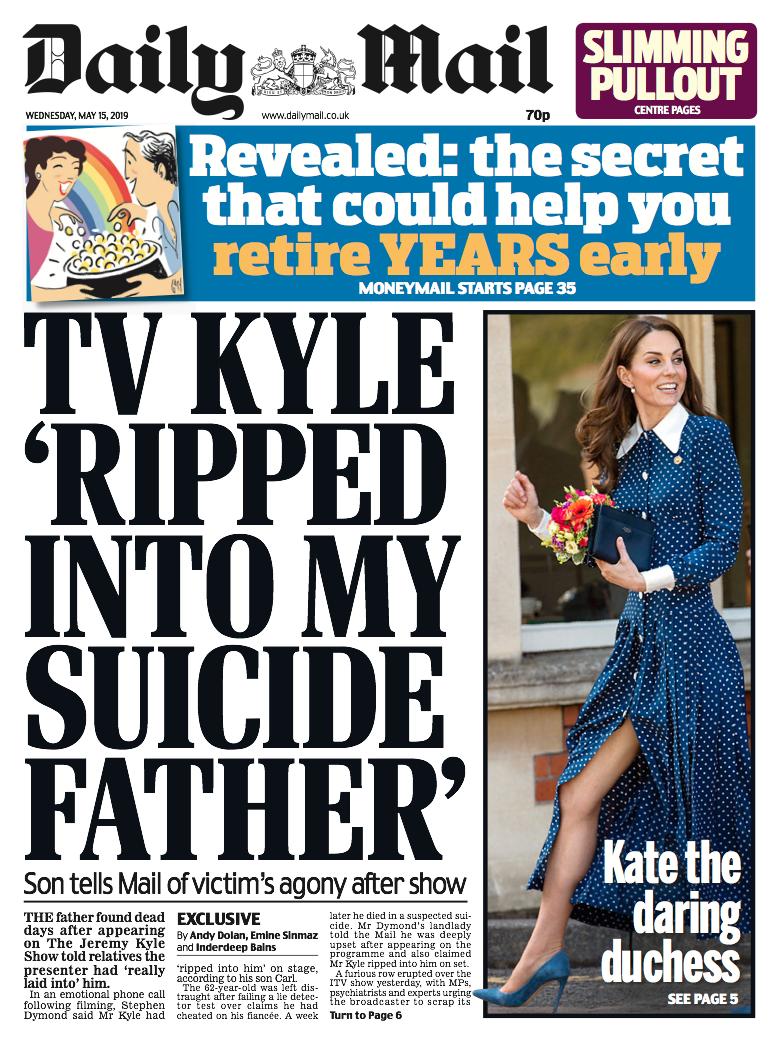 “Real Deal in CRISIS as couple STORM OFF after losing £3.20 at auction”

AS
Ash101 14 May 2019 11:30pm
Andrew posted:
The Daily Express haven’t run with it, because they’ve realised they can’t run loads of click bait stories about Dickinson’s Real Deal, so they’d probably prefer it continued!

This is a good point. I understand The Sun/Mirror/Star all have different editorial teams for print and online articles but all the tabloids seem to run those click-baity stories about daytime telly.

As someone said a few pages back about repeats/online clips, I doubt these articles help some cases when the stories get posted in an article to an audience who didn’t see the show.

bilky asko Tyne Tees Look North (North East) 14 May 2019 11:34pm
The Most Trusted Newspaper in Britain doesn't feature Jeremy Kyle on the front page at all:

AN
Andrew Founding member Yorkshire Look North (Yorkshire) 14 May 2019 11:45pm
How about the FT?
SE
Square Eyes Founding member 14 May 2019 11:48pm
The tabloid press is full of online clickbait articles based on The Jeremy Kyle Show. Usually in articles complete with nasty tweets from viewers about participants appearance and mocking them. Between them the press and social media perpetuate bullying that goes on beyond the show itself.

Yes it's bad enough to actually broadcast this show in the first place. But the hypocrisy of our press is astounding. They are part of the problem too.
CB
ChipperBird Anglia (East) Look East 15 May 2019 12:06am
EDIT: Post typed up before I saw the Daily Mail story with potential further details on the case involved. Points still valid.

Speaking as someone with depression & anxiety, people forget that (assuming it's suicide) - there's usually a lot of things going on to make someone take such a dark road, it's not like "whelp gonna look stupid on TV better kill myself", it's more like a dripping tap of constant stress around life, how little control you have over it, and the sneaking idea that if you can't improve things or fix your relationships, then maybe eliminating yourself solves everything in a quick fashion. Granted yes, "Going on Jeremy Kyle to discuss my issues in front of a live audience" is probably going to add some drops to the cup.

It's far too common these days that people look at someones history and condense the reason they became self-destructive to any one thing. That's not to say I don't think what ITV has done is right, but I think rushing to conclusions could potentially muddy a complex case where I'm sure the family are keen to understand how things came to this tragic conclusion for their loved one.

(also I think Daily Fail here also skipping on some press rules about suicide cases here - it's equally as predatory to get the scoop on this guys death and push a family dealing with massive trauma to speak out when really this should be handled in a private investigation rather than in the public sphere. But hey whatever sells the papers right?)

Putting that aside, the JK team could be a positive force when it did less of the "lie detector" and "gonna call you scum a lot" type stories. Like the research team finding lost relatives, or helping people who honestly called up to admit their faults who maybe needed a push to face family over it. The issue for me has always been the cases that seem to have annual passes to the JK show or probably could of been best served by being referred directly to the aftercare team rather than put on the show. Alas people love to watch that sort of thing, was the same reason Big Brother became a sensationalised mess - there's a reason it dropped the house tasks, chickens and proper psychological study over booze, sex and cheap twists.

I admit when much younger it was sometimes nice to watch JK to remember at least things were not that bad for me. Now when it's the "yell at a villian of the piece" episode, mostly you just hope that maybe it stops someone continuing a destructive cycle of going back to people who are very bad for them.

Also Judge Rinder is generally a lot more softball, he ribs the guests a bit, but generally doesn't go hard unless something really seems wrong. Not sure they would move him from his current slot however. IMO I wouldn't mind a cooking show in the middle there, even if that does somewhat overlap with This Morning.
Last edited by ChipperBird on 15 May 2019 12:25am

Again, no mention of Jeremy Kyle:

CA
Cando London London 15 May 2019 12:15am
I hate to defend them but most of the Newspapers and their click bait online editions are editorially separate with their own highly paid Editors.
Infamously Paul Dacre absolutely despised the Mail Online and their celebrity obsession and The Daily Mirror's editor would have to complain to the papers owners to get stuff removed from The Mirror's website. You should see some of the absolute rubbish The Telegraph commission for the website which would never be touched by the newspaper.
JO
Jonwo (previously Jonwo87) 15 May 2019 3:07am
JCB posted:
Anyone else think they're eventually just going to give the slot to Piers Morgan?

He often complains about how the early starts on GMB are "killing" him.

A bit of variety is needed though. As others have said alll ITV's live daytime shows are starting to blend into one. GMB, This Morning, and Loose Women all now seem to have a very similar clickbait feel about them. This Morning last week had a debate titled "SHOULD SANDWICHES BE POLITICALLY CORRECT?"

I've watched a bit of Wendy Williams and I think something like that either live or recorded could work as a Piers vehicle.
JB
JasonB London London 15 May 2019 6:17am
Jonwo posted:
JCB posted:
Anyone else think they're eventually just going to give the slot to Piers Morgan?

He often complains about how the early starts on GMB are "killing" him.

A bit of variety is needed though. As others have said alll ITV's live daytime shows are starting to blend into one. GMB, This Morning, and Loose Women all now seem to have a very similar clickbait feel about them. This Morning last week had a debate titled "SHOULD SANDWICHES BE POLITICALLY CORRECT?"

I've watched a bit of Wendy Williams and I think something like that either live or recorded could work as a Piers vehicle.


I can’t picture Piers Morgan starting his show with “How You Doin” and getting his audience to go “whoop whoop”
Have you washed your hands?
CM
cmatthews13a Tyne Tees Look North (North East) 15 May 2019 8:20am
Sky News reporting that ITV will be making a statement on the future of Jeremy Kyle later today.