Comcast to compulsorily acquire all shares not already held. (September 2018)

This site closed in March 2021 and is now a read-only archive
Previous Next
DV
DVB Cornwall 8 October 2018 10:12am
21CF formally withdrew it's offer for Sky this morning (Mon 08-Oct-2018) and will return to their original owners any shares pledged to them. Comcast is now the only bidder. It is also expected that the transfer of the block of 21CF shares in Sky to Comcast will complete tomorrow (Tue 09-Oct-2018).

The end game (the 90pct threshold of acceptances) could be reached later this week.
HC
Hatton Cross 8 October 2018 1:52pm
Sorry, if its been mentioned before, but thinking about a 'tangent side issue' with the cutting off from 21CF and attaching to Comcast/NBCU.

Will 'Ian King Live' on Sky News still be based in the News UK head offices, or could we see him anchor from CNBC London studios going forward.
LH
lhx1985 8 October 2018 2:39pm
Good question. I would suspect that NewsUK would currently be leasing part of its office space to Sky - even though the two companies would have been closely linked.


Well hasn't it always been loss making? It was important back in the day when Sky were looking to dominate the pay TV market and to do that they needed to have every genre & type of service covered. But the current management admitted it had became less important to them and was no longer critical to the business.

NBC may take a different view to that, but to revive it it needs investment and then still run at a loss.
DV
DVB Cornwall 8 October 2018 7:39pm
More endgame movements on the Markets. The Executive and Employee Share schemes are being wound up, in the usual manner. This is to enable compensation for those who have outstanding awards to benefit despite the underlying shares being removed from the market. An additional 5.39M shares are being created to satisfy these plans. They'll not be issued for market sale but will be converted once the deal goes through.
CA
cat 8 October 2018 7:43pm
They’ve made a £1bn commitment to it over the next ten years (continue current funding for ten years)

So I don’t believe for a second they’ll leave it alone. Editorial independence from Comcast HQ maybe... but they’ll own it, so they’ll get to say who the editors are. They aren’t going to be chosen by Government or a third party.

I suspect they’ll look at it, wonder why nobody watches it, and see if they can’t find a way to make it make money.

But they have much bigger fish to fry on the distribution and content side, so I can’t imagine News is a priority. I doubt it’ll look and feel much different a year from now.
HC
Hatton Cross 8 October 2018 7:45pm
Sky News has always been about credability rather than coinage.
If Comcast keep the same mindset, then there should be no difference.

Co-incidentally, I've just caught highlights of last night's Sunday Night (American) Football game, which was covered in the US by NBC.

Amused to see the multi-coloured NBC peacock DOG originating from the US coverage, was clashing over the first third of the grey opaque Sky Sports Arena DOG.
Normally when that happens, Sky move their DOG to another 'clash free' part of the screen...
DV
DVB Cornwall 9 October 2018 12:42am
Not a real serious attempt just messing around post midnight ..... 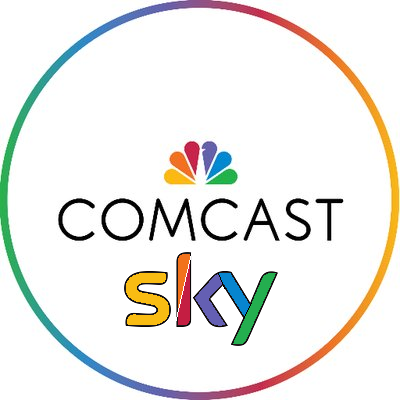 I could see them doing something to the Sky logo like the bottom but with the peacocks feathers inside the letters as coloring. Like overlay the current sky logo overtop a large peacock and hide the feathers. Or they can go the route they do with NBCUniversal with Comcast [peacock] sky.

I also still can’t believe the so called story that made David Roberts want to buy Sky started with a conversation with a Taxi driver about Sky’s STBs.

I forget does Sky reuplink the channels on FreeSat or they tune into them and then uplink their exclusive channels? Sky only uses one or two satellites for programming and doesn’t own them correct?
LL
London Lite Founding member 9 October 2018 2:52am
Rkolsen posted:


I forget does Sky reuplink the channels on FreeSat or they tune into them and then uplink their exclusive channels? Sky only uses one or two satellites for programming and doesn’t own them correct?


Sky and Freesat use the same satellite position. All of Freesat's FTA channels are the same on Sky, the difference is that Freesat provides their own EPG which channels can pay to be on in addition to Sky.

Before Sky Q, former Sky customers could just buy a receiver and connect to the Sky antenna.