This site closed in March 2021 and is now a read-only archive
Previous Next
AS
Asa Admin 20 September 2018 9:15pm
So a recent conversation rekindled my interest in a side project I'd thought about a while ago. It's a way of automatically recording, tagging and uploading the idents and continuity announcements for BBC One and Two. A ‘Genome for idents’?!

Read on if you want to know the technicals behind it, otherwise see what you think at the reborn TV Home . 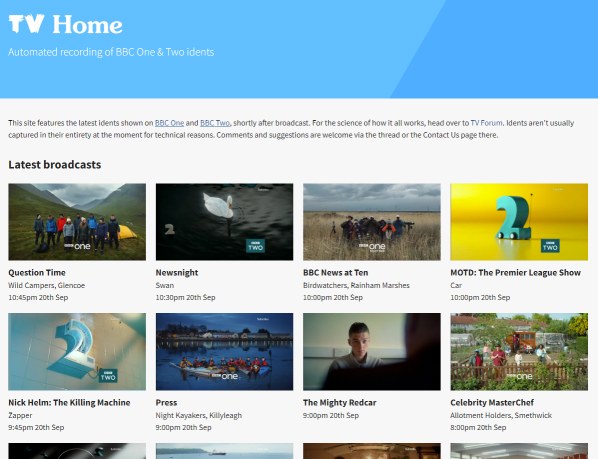 The BBC send an EIT p/f signal to note when the next programme is about to start. Luckily this (generally) gets flagged at the start of the ident. So I connected up a Raspberry Pi with a DVB-T2 292e nanoStick and the Tvheadend software which can do so called 'accurate recordings'. As both channels are on the same mux I can record both without a second tuner. A pre-record script sets a timer to cut the recording after about a minute (no point letting it record the whole show). A post-record script then uploads the recording to an Amazon S3 bucket.

A few Amazon tools come into play - their Lambda functionality is triggered when a new recording has been uploaded, it sends the file to the Elastic Transcoder which cuts the duration down, compresses the video and generates the thumbnail. I tried doing this bit on the Pi but it just killed it.

Once complete another Lambda function adds it to TV Home's database. Initially I was then giving the Amazon Rekognition service the thumbnail and it would detect the scene and return words that match. On the whole this worked quite well - "bicycle" "bike" etc. for the cyclists ident and "football" "soccer" for the football training one. It wasn't perfect though and I imagine would be pretty poor for BBC Two so I switched to doing a basic image similarity instead. Each ident is stored in the DB with an example image. The accuracy is high but it will get stuck occasionally (e.g the excellent Arts idents on BBC Two)

The biggest problem at the moment is that the idents are sometimes incomplete. BBC Two is great - the flag generally seems to fire right at the start, giving all the audio and all bar the first second of video. BBC One is more haphazard - I don't know whether it's the software, hardware, a dodgy signal or the broadcaster.

The final announcement of the night always seems to record from the BBC News ident, rather than BBC One. Not sure why they would treat that junction any different, would love to know if anyone has any ideas. For other junctions, there doesn't seem to be any pattern - one day, half the recordings were opening titles rather than idents

I'd be interested to know who/what triggers it in the system.

The One Show had to be manually adjusted for a while too too thanks to it starting minutes before the published time! It also didn’t record last Sunday’s MOTD - possibly treating it as a repeat, although the software is set up to record all.

I did end up using the Rekognition service though to detect text on the thumbnail - it's a nice way of guessing whether the ident or programme was actually recorded (I can fade it out on the page if the programme).

Obviously there's loads of things that could be done with it - idents by programme, most frequently shown, highlighting first appearances etc. I could switch to HD too and avoid the regional differences but that will mean larger uploads.

This was all a bit of an experiment and a quick win to see if I could get something up and running. Hopefully some find it interesting!
Last edited by Asa on 20 September 2018 10:55pm - 3 times in total
VM
VMPhil 20 September 2018 9:25pm
This is a great idea - you're potentially taking something as ephemeral as continuity and giving it a permanent archive, especially useful in an era where widespread use of PVRs mean we'll no longer be stumbling upon today's continuity years from now on tapes or DVD-Rs.
JO
Joe 20 September 2018 10:20pm
This is fabulous, and just the kind of ‘engineering’ job I love - building off something meant for one task and suddenly having an excellent, automated output like this.
:-(
A former member 20 September 2018 10:45pm
Colour me impressed!
RO
rob Founding member 21 September 2018 7:28am
This looks amazing! Good job Asa!
EL
elmarko 21 September 2018 8:05am
This is fantastic. And yeah, Pis aren’t good for encoding...

...but I do run distributed computing on mine. It gets warm

TI
TIGHazard 21 September 2018 11:20am
Good job Asa. Any chance of including BBC4 in there?
BU
buster 21 September 2018 11:33am
Have you found any issue with BBC Music programmes? I've always guessed the "signal" for these programmes gets fired on the BBC Music intro, rather than the ident, which is a bit annoying as it means my Top of the Pops recordings generally start a few seconds into the titles as it's so short.

I wonder if it's the same theory as the BBC News simulcast - the signal gets fired on the last thing to be broadcast by pres before the programme begins?

buster posted:
I wonder if it's the same theory as the BBC News simulcast - the signal gets fired on the last thing to be broadcast by pres before the programme begins?

That's probably it, isn't it? It happens when showing BBC Three programmes too so I guess that's how it's triggered, rather than anything specific tied to the ident.


Unfortunately the software doesn't let me add padding to an accurate recording, otherwise I could get around those issues. And my knowledge of C which TVheadend is written in is next to zero so I wouldn't know where to start!
JO
Josh 21 September 2018 10:53pm
I'm impressed!

Is it because the signal wasn't sent or it was, just not received?
:-(
A former member 21 September 2018 11:10pm
I think the programmes run early. There is a few jct were programmes run early. ITV bad for this 4pm tipping point ALWAYS starts at 15.58, while the chase is 16.59. As pointed out Homes under the hammer can also start bang on 10am.