This site closed in March 2021 and is now a read-only archive
Previous Next
BK
bkman1990 10 April 2018 6:55pm
Mark Zuckerberg's Congressional Hearing for Facebook's data breach with Cambridge Analytica will take place later on from Washington D.C. at 2:15pm ET today (Tuesday 10th of April) & at 10am ET on Wednesday 11th of April.

News networks in the U.S. have released a list of special programmes for this live hearing.

Live online web streams will also be available for those without coverage of linear TV news channels.

Quote:
Facebook CEO and co-founder Mark Zuckerberg will make an appearance before members of Congress this afternoon and Wednesday morning. In two days of hearings, he will face questions on how and why Facebook failed to protect the data of many millions of its users.

The Congressional hearings were prompted by the revelation that Cambridge Analytica, a British political consulting firm linked to the Trump campaign, obtained data of roughly 87 million Facebook users to profile potential voters.

Senate and House lawmakers will also ask Zuckerberg about the spread of fake news on Facebook, and how Russians interfered during the 2016 presidential election by using the social media tool.

Here’s how TV news is covering the proceedings:

ABC News will be doing a network special report on Zuckerberg. Chief Anchor George Stephanopoulos anchors with Congressional Correspondent Mary Bruce from the Hill. ABC News will carry it online via live stream as well.

Viewers can go to @TicToc live stream from their mobile app or desktop, or watch via live.twitter.com/tictoc. Bloomberg coverage will be hosted by Bloomberg Technology editor Brad Stone, who will go live at 1:45 pm ET on Tuesday leading up to the 2:15 pm hearing to provide real-time updates and contextual analysis of conversations taking place on Twitter.

Joining Stone will be Bloomberg News politics reporter Sahil Kapur who will provide relevant updates from Capitol Hill as well as Sarah Frier, tech reporter to provide insight into what the stakes are for Silicon Valley.

Viewers can watch the pre-analysis and live stream the hearing directly on Twitter. During the hearing, TicToc will provide a round-up of key facts, a “What We Know” rundown for those tuning in throughout the hearing, and highlights of key Tweets relevant to the news.

On Wednesday, Stone will also host the live stream of the 10 a.m. ET testimony with the House Energy and Commerce Panel.

CBS’s streaming news network, will provide coverage of Mark Zuckerberg’s testimony before Congress beginning today at 1:00pm ET anchored by CBSN’s Tanya Rivero leading into the Senate Judiciary and Commerce hearing at 2:15pm ET. CBSN will stream the hearing in its entirety throughout the afternoon followed by analysis from CBS News correspondents and industry experts. CBSN’s Elaine Quijano will provide a full recap and ongoing analysis during Red & Blue at 9:00pm ET.

On Wednesday, special coverage will begin at 9:30am ET anchored by CBSN’s Vladimir Duthiers and Anne Marie Green. CBSN will carry the House Energy and Commerce hearing live at 10:00am ET followed by analysis from CBS News correspondents and industry experts. CBS News correspondent Errol Barnett will provide a full recap and ongoing analysis of the hearings during Red & Blue at 9:00pm ET.

CNBC will air the testimony live both today and tomorrow as well as livestream on CNBC.com. Julia Boorstin and Kayla Tausche, both in Washington today and tomorrow, will lead the on-air coverage. Julia will focus on Facebook while Kayla will report on the Washington and policy angles.

For CNBC Digital, Sara Salinas will be covering the tech angle and Jacob Pramuk will cover the Washington angle. CNBC will also offer the testimony unauthenticated on AppleTV, YouTube and Amazon Fire TV.

Jake Tapper will lead CNN’s coverage of Mark Zuckerberg’s testimony before the Senate committees this afternoon. Joining Jake Tapper on set will be Gloria Borger, Chris Cillizza, Jeffrey Toobin and Dylan Byers. Laurie Segall, who has reported extensively on Facebook and has previously interviewed Mark Zuckerberg, will be live from Capitol Hill.

Lester Holt and Savannah Guthrie will co-anchor special coverage of Facebook CEO Mark Zuckerberg’s testimony at a joint hearing before the Senate Judiciary Committee and Senate Committee on Commerce, Science and Transportation beginning today in the 2:00 p.m. E.T. hour. The duo will anchor coverage from 30 Rock.

Around 1:45 p.m. E.T., Savannah Sellers, host of Stay Tuned on Snapchat, and MSNBC correspondent Jacob Soboroff will host a digital pre-show, which will stream on NBCNews.com and on NBC News’ YouTube, Facebook, and Twitter channels. Following the live stream of the full testimony, Sellers and MSNBC correspondent David Gura will host a digital post-show.

Will anyone be watching this coverage over the 2 days?

Two channels, two options: @JakeTapper is live on @CNN juggling the FB hearing, the W.H. briefing, Cohen news, etc. One channel away on @HLNtv, we're providing wall to wall coverage of the FB hearing. I'm on set with HLN's @EricaHill for the duration

BK
bkman1990 10 April 2018 7:14pm
Katty Kay from Washington from BBC News is saying that they will cover the hearing later when they get it to the viewers. Tonight's edition of Beyond 100 Days is shorter being single headed with Katty because Christian Fraser is off for this week.

Mark Zuckerberg also gave an update to say that he will at the hearings in roughly an hour's time.
BK
bkman1990 10 April 2018 7:32pm
Zuckerberg has now arrived at the hearing. BBC News have replaced their Beyond 100 Days strap with Breaking News lower thirds.
:-(
A former member 10 April 2018 7:48pm
This will be car crash telly at its best.
GM
Gary McEwan 10 April 2018 7:53pm
Oh please someone make him cry...
BK
bkman1990 10 April 2018 7:56pm
This congressional hearing is one of Facebook's biggest issues to face them for a very long time. For years they had this unyielding power on their user's data with little or no consequence to Zuckerberg's own reputation. This hearing right now does have the power to naw it's way through it to get some of it's power back to it's users. How he handles himself at this hearing is now going to be key for his own sake, otherwise if that doesn't happen in time, this could be a sink or swim moment for both Facebook & Zuckerberg. With a userbase of 2 billion people worldwide; it's on Zuckerberg to answer the questions needed to try & prevent it from happening again.
BK
bkman1990 10 April 2018 9:48pm
BBC NC is currently using the BBC World feed for coverage of the hearing this evening. It updating really well with this live coverage.

Any other example of graphics available from other channels as the thread is looking quite bare?
:-(
A former member 10 April 2018 9:55pm
BBC and SKY are both using different feeds, but who are providing the feeds? 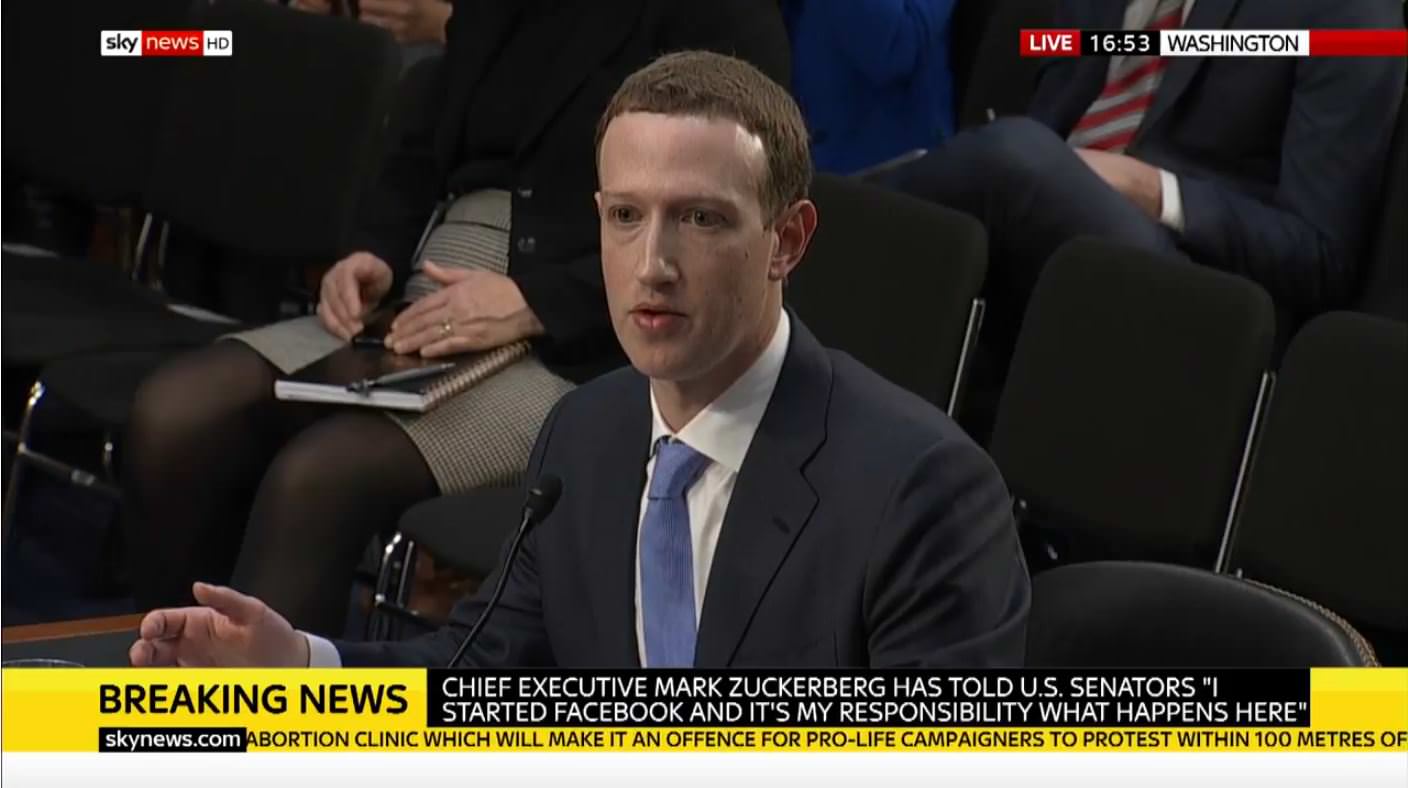 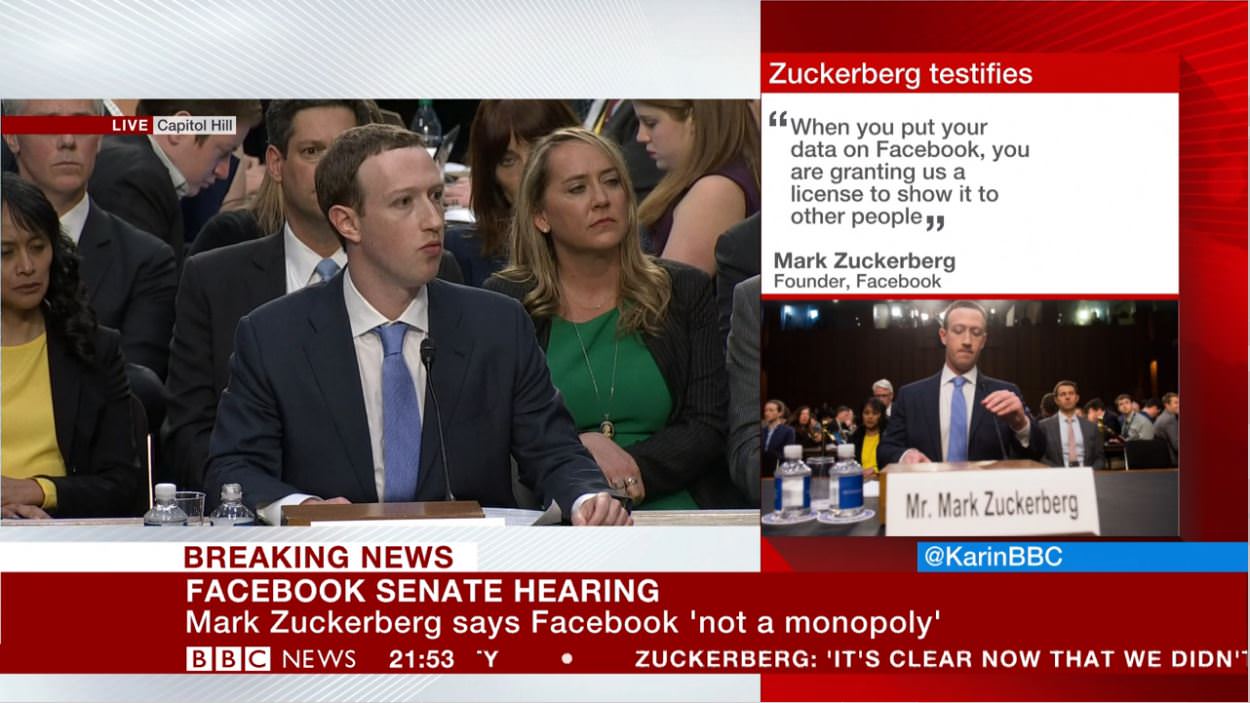 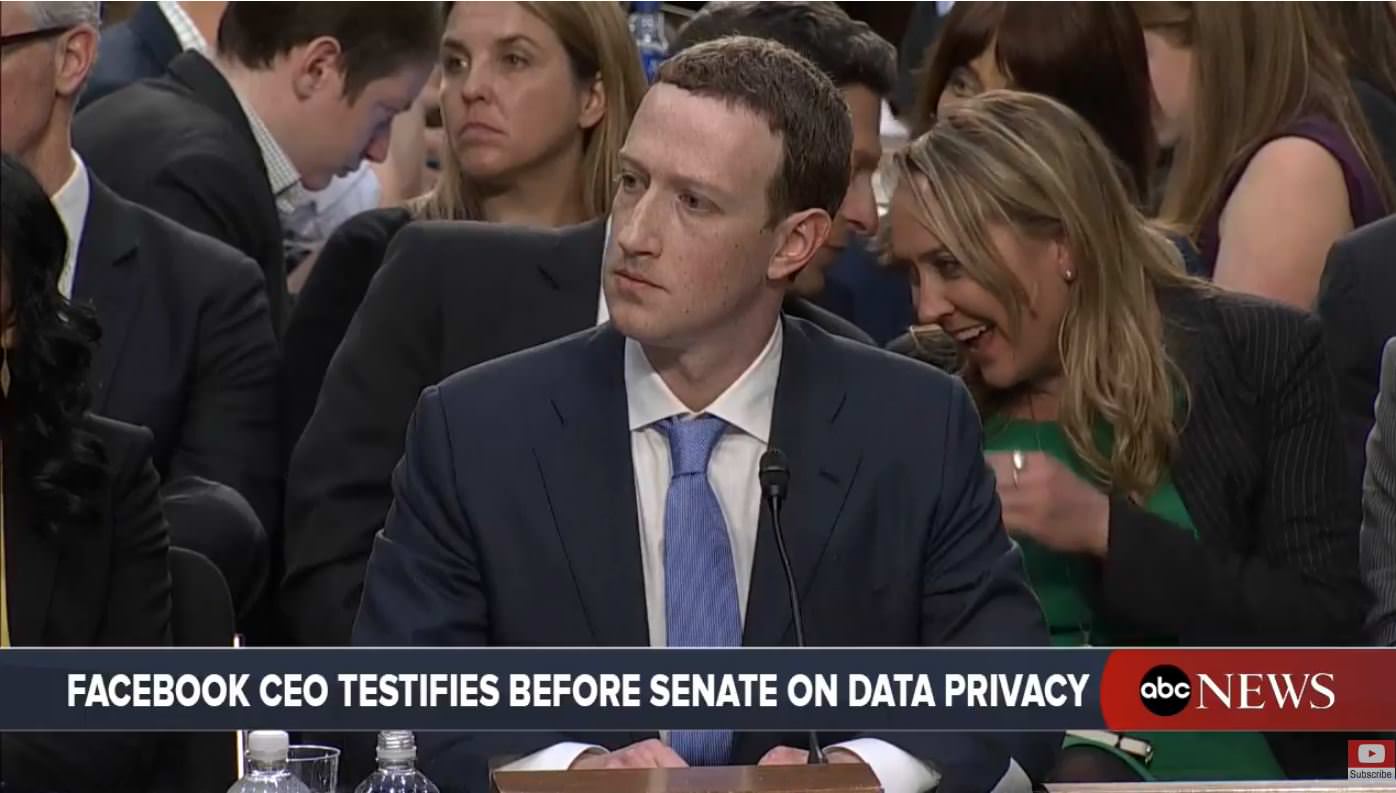 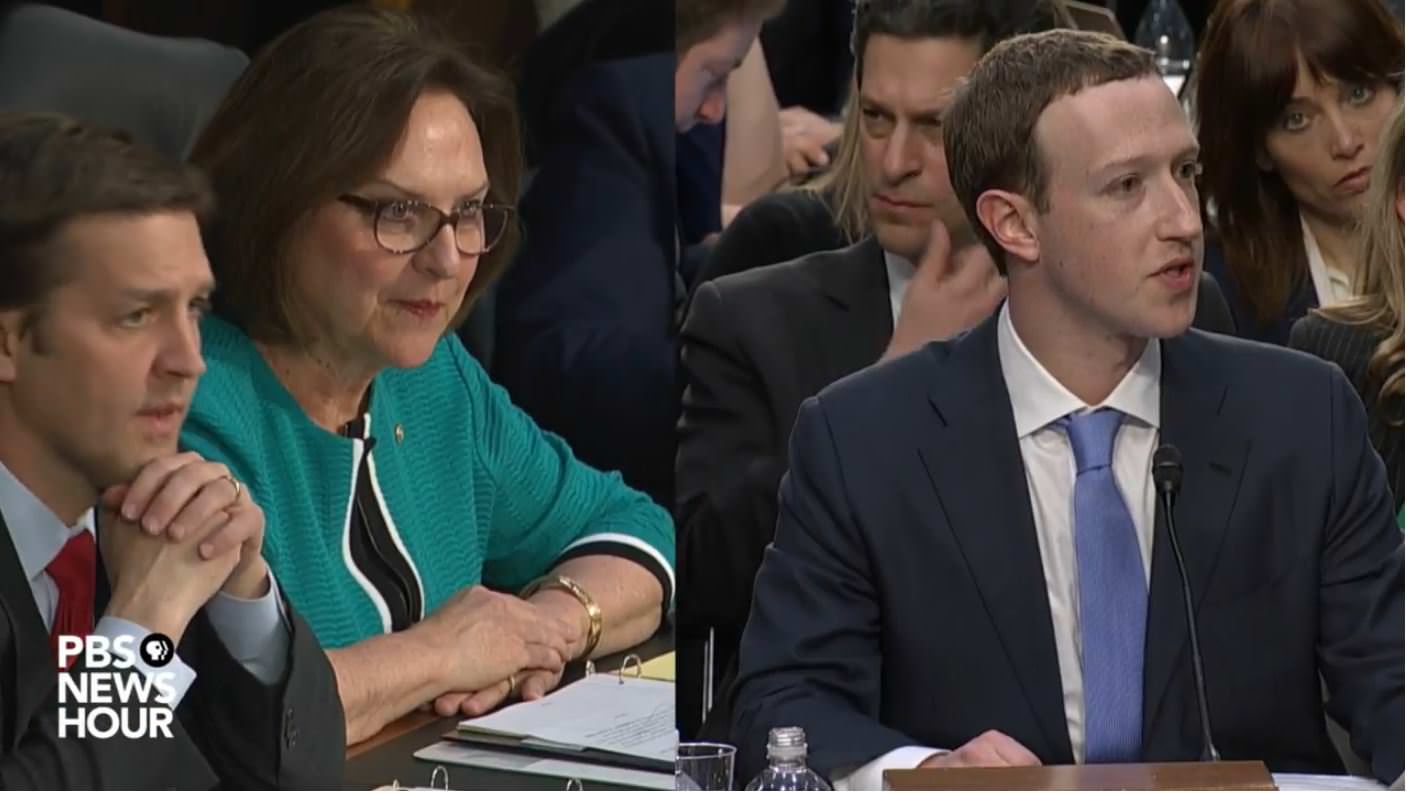 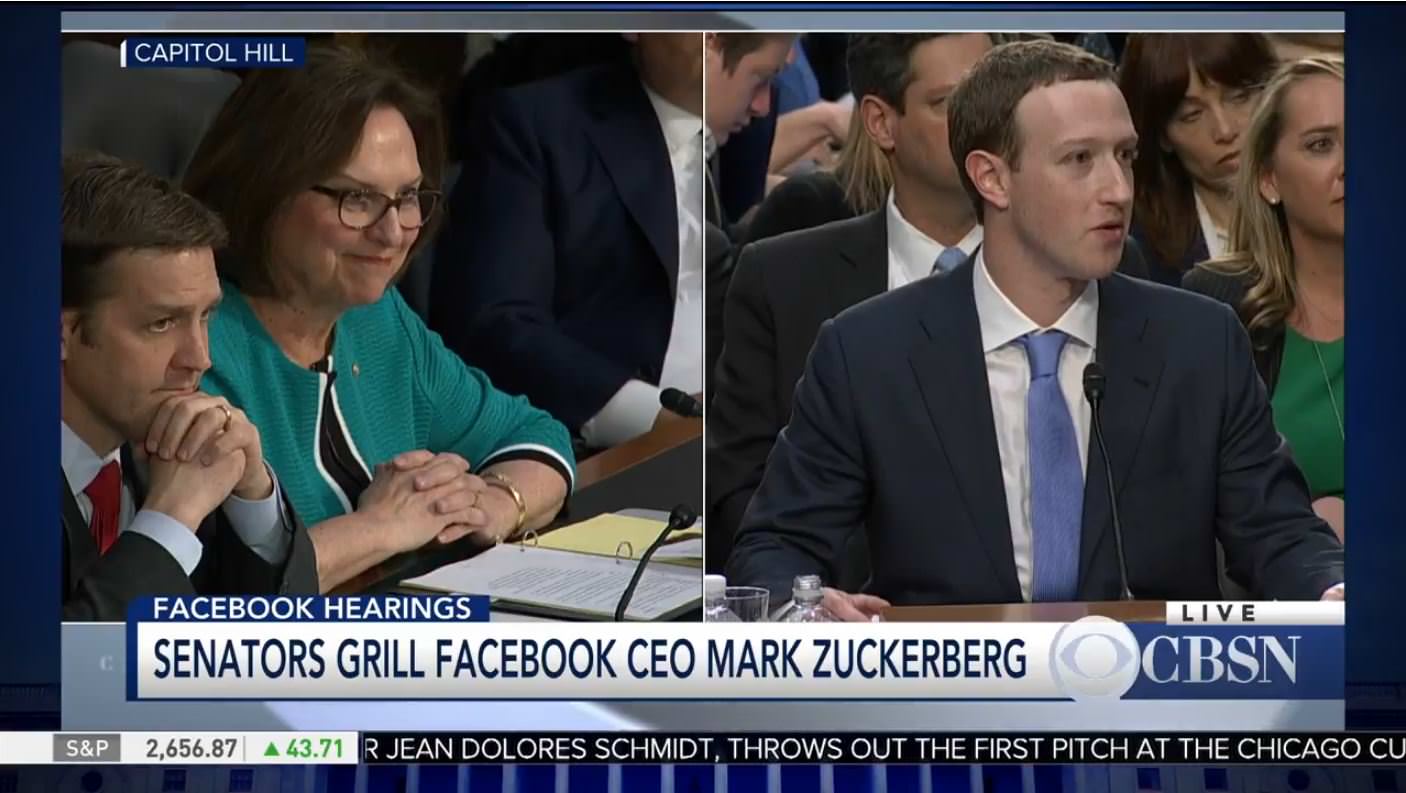 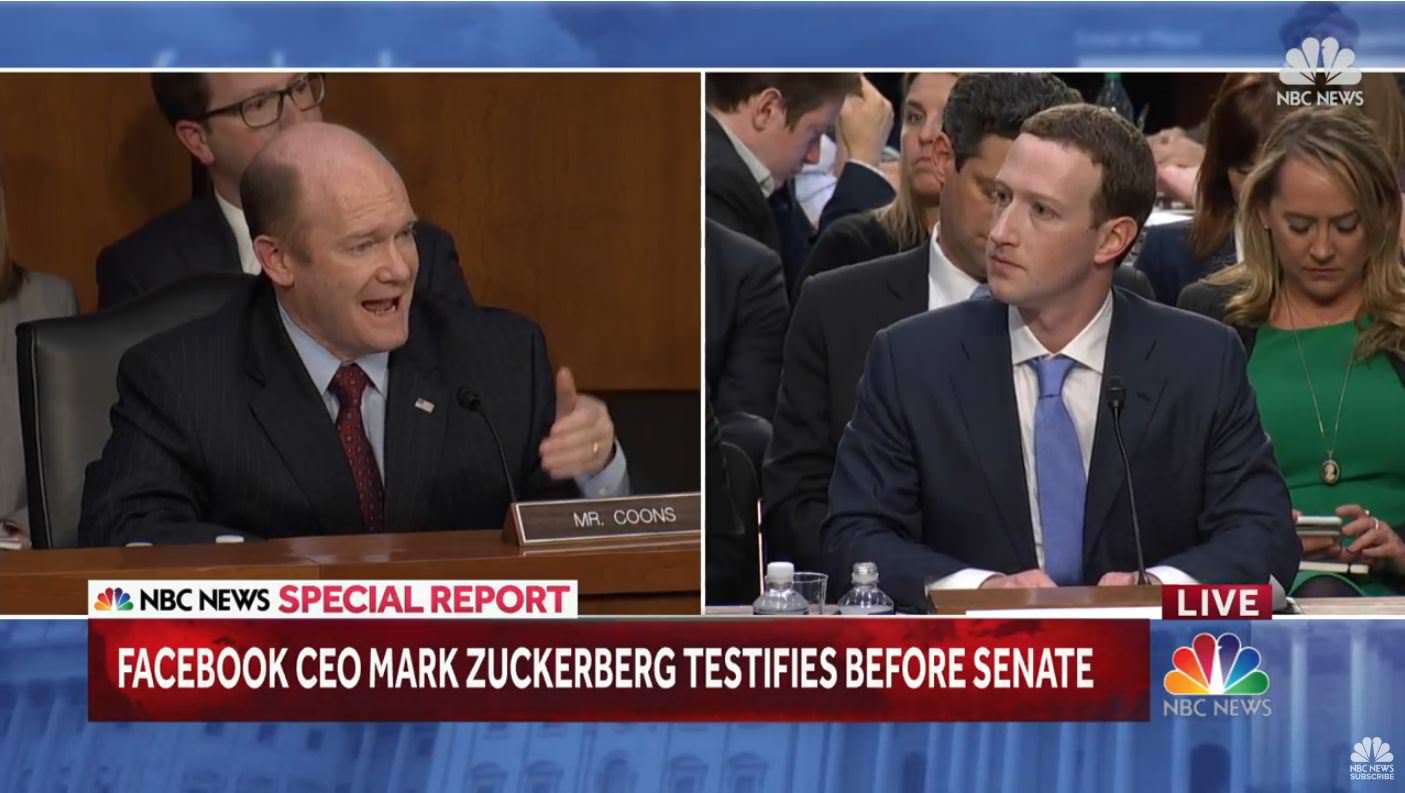 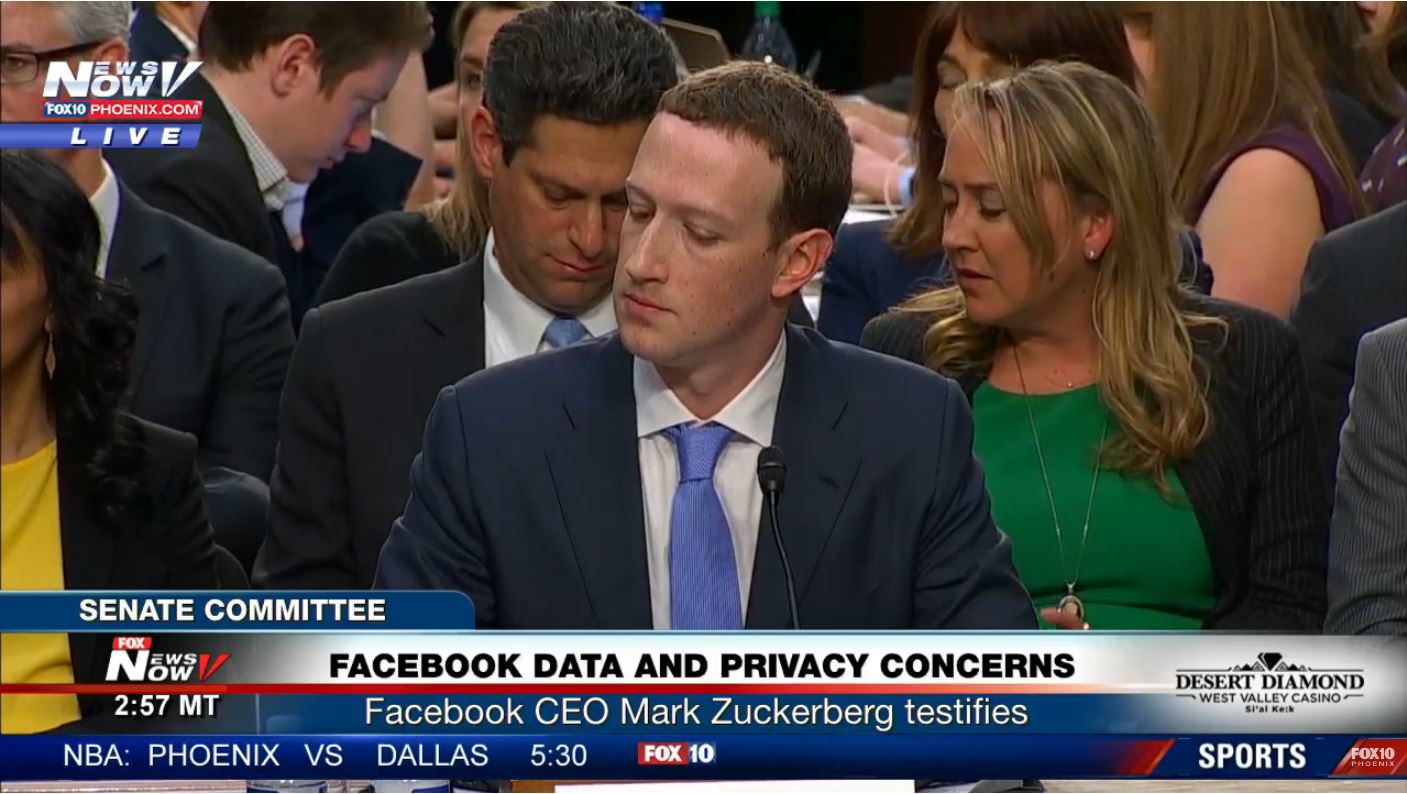 RK
Rkolsen 10 April 2018 10:00pm
bkman1990 posted:
BBC NC is currently using the BBC World feed for coverage of the hearing this evening. It updating really well with this live coverage.

Any other example of graphics available from other channels as the thread is looking quite bare?


The US networks used the standard special report graphics. NBC had the longest coverage and is still going. However they had a “hiccup” allowing their stations to drop out of coverage at the top of the 4PM hour (when many start local news).
BK
bkman1990 10 April 2018 10:06pm
I have switched to Bloomberg HD for their coverage. The BBC NC has switched over to the News at 10 with Reeta Chakrabati.

Al Jazzera English, TRT World & even CNN International are not showing the hearing at all because they have their normal schedules.