Article in the New Statesman (October 2017)

This site closed in March 2021 and is now a read-only archive
Previous Next
VM
VMPhil 20 October 2017 6:35pm
The New Statesman has published an in-depth look at Ghostwatch on the occasion of the 25th anniversary of its one and only airing.

‘Ghostwatch: the Halloween hoax that changed the language of television’

Interesting titbits such as Jonathan Powell, controller of BBC1 at the time, deciding on the wording of the continuity announcement used into the programme

Quote:
But it was Powell who insisted that the drama tag and the credits be applied to Ghostwatch just two days before transmission. “Richard and Ruth thought that if we did that, people would miss out on the joke they were playing,” he says. “I vividly remember saying, ‘You can’t do this.’ Richard was pushing the line, if not overstepping it completely, to try and get the thing past.” He also styled the continuity announcement to make the fictional element clear: “A Screen One presentation, a film…”

and the BBC still don't like talking about Ghostwatch

Quote:
This month, a planned Ghostwatch item on The One Show, to be hosted by Sarah Greene, was dropped when the editorial policy department vetoed it.

“The BBC were really embarrassed by it,” says Jonathan Powell. “Anything like that would put the kibosh on it being celebrated. There was a feeling that they should shove this one in the vaults and lock it away.”


Is the article right in saying Brass Eye was never repeated? I know that the fake news report in the middle of 'Decline' was updated to reflect a change in Channel 4 News branding (compare the original and the update), but was that for the DVD release, or did the original series get a repeat in advance of the pedophilia special?
VM
VMPhil 20 October 2017 7:55pm
Actually, Brass Eye apparently did get a repeat, I thought that was edited for the DVD release too but I was told on Twitter that it was done for a repeat run in 2001. Actually, looking back now I think Blake posts here so he might have more detail!

Re: continuity, there was also this piece of additional reassurance later in the evening.

BC
Blake Connolly Founding member 20 October 2017 8:46pm
Yep - the article is definitely wrong about Brass Eye. Not only was there a revised repeat of the original series in the run-up to the special in 2001, but even that controversial special was repeated in 2002.
HC
Hatton Cross 20 October 2017 8:56pm
And if you want to see how far things have come in 25 years..
..The One Show wanted to do a feature on this drama. A post watershed drama, with well chosen clips being shown well before the watershed.

It's a pity BBC Editorial Policy put the breaks on that, because it would help silence the chatter from those countless millions who 'claim' to have watched it, and saw scenes that have been passed down via Chinese Whispers - like someone in the office at work who still claims it showed Sarah Greene strangling a child at the house (nope), and Michael Parkinson was possesed by the spirit of a bad chat show host - and no-one noticed (badum-tushh)

However, given the unexpected and tragic event post-broadcast, I can understand today how the mention of the programme still gets the worried looks at BH. Had none of that happened, I'm sure it would have cleaned up at the Bafta's in 1993 as best television drama/screenplay.

Which is a shame, because I watched it go out - and was not scared for one second, as I knew it was a piece of scripted drama, and was more facinated at how they faked a 'live' tv programme so well.

But, as the article states, it was British Tv's last hoax, due to sites like this and social media, any attempt to fool the audience for 75 minutes would be over before it started due to #ghostwatch_not_real trending before the opening titles had finished.
S7
sbahnhof 7 21 October 2017 9:20am
VMPhil posted:
Re: continuity, there was also this piece of additional reassurance later in the evening.

Given the tragic consequences of the broadcast, and the harm it caused, it's understandable that they don't celebrate it in any way. It sounds like the main problem was a lack of communication with continuity – if they got 20,000 calls to the show's phone number, surely you'd give a disclaimer straight after the end credits. They knew kids had been watching.

Not to knock the drama itself, which by all accounts was too good, but the programme was just mismanaged, not handled sensitively or smartly. Plenty of other examples of that attitude in TV history, of course.

Maybe there's something to the theory that this could only have happened around 1992. Would BBC 1 have shown something like this in the same way in, say, the '80s?


Hatton Cross posted:
But, as the article states, it was British Tv's last hoax, due to sites like this and social media


Couple of points there... 1) Twitter and Facebook are a hoaxer's dream, 2) TV Forum would mainly focus on the hoax's wrongly-sized logos

I reckon TV could still hoax a lot of people. For example, many viewers seem to believe that Piers Morgan is a broadcaster.

Those individuals who had apparently "died because of it" didn't, because they were already ill to start with - Ghostwatch was never implicated in their deaths shout of the disgraceful Murdoch press at the time desperate to destroy the BBC for anything.
DA
davidhorman 21 October 2017 11:48am
Hatton Cross posted:
But, as the article states, it was British Tv's last hoax


Well, that we know of. I've had my suspicions. I seem to recall that The Great Reality TV Swindle featured a number of jobbing actors that were never identified as such, and some of it looked very staged.

Then at the other end of the spectrum you've got things like zoo-bound polar bears, digitally duplicated penguins, and faked pica (chubby little South American rodents) chases.

And don't get me started on Derren Brown...
IS
Inspector Sands 21 October 2017 12:40pm
radiolistener posted:
Ghostwatch wasn't a hoax, it was a piece of drama.

Yep, in that way it's the same as Orsen Welles' infamous radio adaptation of War of The Worlds, broadcast in 1938. That too fooled many because they started listening after it had started
https://en.wikipedia.org/wiki/The_War_of_the_Worlds_%28radio_drama%29
BH
BillyH Founding member 21 October 2017 12:44pm
I was fascinated to learn a few years back that the famous 'War of the Worlds' broadcast from the 30s - the broadcast all media hoaxes get compared with - was in fact a minor event that caused no chaos or panic at all, and the reports of hysteria were invented by the newspapers to try and demonise the then-new medium of radio. Even photos of supposedly terrified people were staged later - Orson Welles (the director and narrator) soon began spreading the myth himself, and a legend was born.

What did cause mass panic and anger - and several deaths - was a War of the Worlds broadcast in Ecuador in the 1940s, at a time when relations were hostile between Ecuador and Peru and "invaders' could easily have referred to Peru starting a war. That barely got reported on in comparison.

In the 1990s - shortly after Ghostwatch - there was a US drama called ' Without Warning' that takes the WOTW idea but updates the setting to a TV news station, but it was less believable as the timeline is sped up and there were messages explaining the program's fiction at every ad-break, although no such messages were broadcast when I saw it on the Sci-Fi Channel about a decade ago. That also got shown on Halloween on its first broadcast.
VM
VMPhil 21 October 2017 4:29pm
sbahnhof 7 posted:
VMPhil posted:
Re: continuity, there was also this piece of additional reassurance later in the evening.

And of course, to introduce its programmes on the night BBC2 had some special idents made. They really went all out for Halloween in 1992 didn't they? 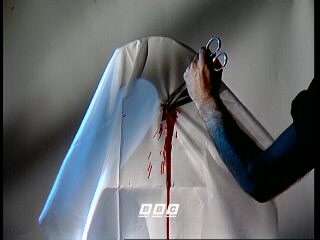 From http://www.meldrum.co.uk/mhp/identzone/bbc2/bbc2_91themes.html
SP
Steve in Pudsey 21 October 2017 5:17pm
There was also the Paul Daniels Iron Maiden illusion one Halloween when lots of people, including an invited audience of celebs thought the trick had gone wrong and he had killed himself live on BBC 1