The return of Saturday morning telly - well almost (May 2017)

A Tweet from Hacker suggests it will be simulcast on BBC Two!

The rumours are true, me & @YasminEvans are joining the cast of Neighbours in the 90s.
We're also bringing Saturday mornings back to #BBC2 😬 pic.twitter.com/EXfLM4UTJn

Jonny Nelson's Tweet also mentions it will be on BBC Two.

Newsround have officially confirmed it will begin on September 30th and also air on BBC Two.

Digital Spy says it will begin at 9am.
Last edited by DCI02 on 10 August 2017 5:18pm
BR
Brekkie 10 August 2017 6:13pm
Good it's getting simulcast on BBC2 but shame they don't just take the risk and put it on BBC1. Really do think Saturday Kitchen could be of more use to the BBC as a daytime fixture during the week - they've tried it a few times and think it would slot in the 11.00-12.15 slot nicely on a more regular basis. 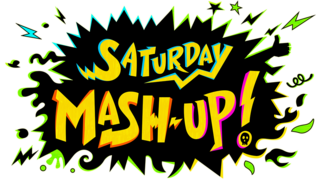 The logo for Saturday Mash-Up, from the CBBC website. Looks very 80s, which was probably what they were going for.
JO
Josh 15 September 2017 9:57pm
BeanoMaster posted:

The logo for Saturday Mash-Up, from the CBBC website. Looks very 80s, which was probably what they were going for.

And the presenter photos from said site: 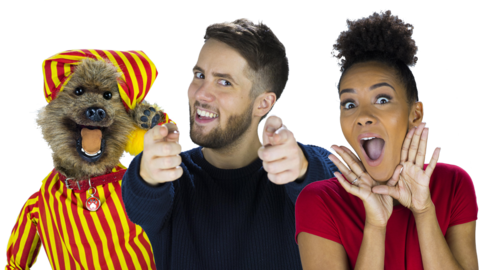 Note how Hacker is still in pajamas, noting the earliness of the show.

EDIT: Removed the word extreme, after realising that there are other shows that start earlier.
Last edited by Josh on 16 September 2017 11:44am
DC
DCI02 15 September 2017 10:17pm
JoshX posted:
BeanoMaster posted:

The logo for Saturday Mash-Up, from the CBBC website. Looks very 80s, which was probably what they were going for.

And the presenter photos from said site:

Note how Hacker is still in pajamas, noting the extreme earliness of the show.

Page for the show released.
It reads 'Join Yasmin, Jonny and Hacker for live Saturday morning fun filled with mayhem, celebrity guests, your favourite shows and gunge!'
JO
Josh 16 September 2017 1:25pm
New promo for the show apparently where a pair of children is bored right up until the clock hits 9am, which when Yasmin, Jonny and Hacker come into their house along with a bunch of other children to talk about the show.
DC
DCI02 16 September 2017 2:11pm
https://www.primarytimes.net/news/2017/09/saturday-mash-up-cbbc-and-bbc-two-from-saturday-30th-september-9-11am

Steve Backshall will be the studio guest this week. Programmes aired include Danger Mouse and The Next Step:

Quote:
This week Extreme Mountain Challenge, Deadly 60 and former Strictly Come Dancing star, Steve Backshall, will be in the studio discussing his animal adventures, answering questions from viewers and taking part in some hare-brained games. Steve will take on the fearsome ‘Push Off’ challenge but will he avoid a mash-up gunging?
:-(
A former member 16 September 2017 2:13pm
Dangerous I can understand but surly there could have got something new?