Off topic, but Order Order reports Nigel Farage has been hired by Fox News.

Hopefully an exclusive contract...
AN
Andrew Founding member Yorkshire Look North (Yorkshire) 20 January 2017 6:01pm
BBC and ITV coverage looked near identical from what I could see, basically almost entirely the same pooled feed, with very few cut aways. There were a few ad breaks on ITV but not many, and certainly not the same frequency as normal
NE
newsman1 20 January 2017 6:16pm
JoshX posted:
The fact that BBC1 used "Exercise Class" for the coverage is stupid. I wouldn't mind if they used "Rescuers" or maybe just "Forest".

Josh 20 January 2017 6:17pm
newsman1 posted:
JoshX posted:
The fact that BBC1 used "Exercise Class" for the coverage is stupid. I wouldn't mind if they used "Rescuers" or maybe just "Forest".

A name for one of the new BBC One idents.

Just read here: http://tvforum.uk/tvhome/new-look-bbc-one-42316/
Stay in touch with me and my waffling at https://twitter.com/JoshxReid. Thanks for having me, I've enjoyed it.
BK
bkman1990 UTV Newsline 20 January 2017 6:32pm
The BBC News at Six on BBC One displayed the white transparent BBC News logo at the tail end of the Bulletin.

It was displayed when President Trump was waving towards the spectators after his inauguration had ended.
GR
Graffismo World News 20 January 2017 7:10pm 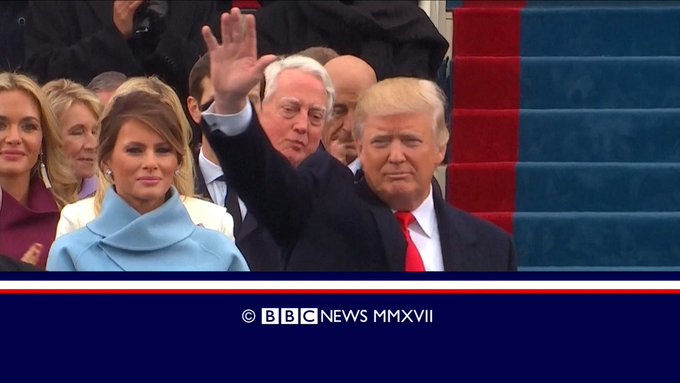 That was the ending on the NC though.

The News at Six on BBC One had a much larger transparent BBC News logo on it's own without the presidential graphics.
BB
BBI45 Central (East) East Midlands Today 20 January 2017 8:38pm
TROGGLES posted:
Who is Olive Trump?

I'm not sure whether to congratulate you on noticing that or just put my face in my hands and ask, why?


Edit: You know what.

Reporting Scotland managed to report that the Bible used in the ceremony was given to Trump by his Scottish mother.
Also, they sought soundbites from people attending a Burn's Supper at his Aberdeenshire Golf Course.
RK
Rkolsen World News 21 January 2017 8:35am
Rkolsen posted:
John Koenig posted:
I have to wonder with a lot of these graphics, do they create them many months before an election? in which case they might not have bothered with Trump versions. That being said they normally prepare for all outcomes.

None of the streams seem to be in full HD, do America still 720p HD as standard?


Fox & ABC (and their related channels) are the only major 720p channels.

I just thought about this some more. As the parade route and event is so large and spread out there is likely a contingency from every major broadcaster and they'll probably be working in their preferred house format. So when the different cameras are taken together and assembled it's a multi format production mixing 1080i and 720p material together. I'm not sure which network was in charge of the final product but I would imagine the NBC, CBS, CNN and let alone all the international broadcast sets would prefer the feed to be in 1080i for minimal format conversion.

According to this Instagram posy by Game Creek Video (a large OB provider) that NBC was the pool for Capitol Building (and I assume on those risers as well) and ABC was along the route on Lafayette Park.

Edit : CNN reports that CBS handled the parade route which likely include the shaky camera of the limousine heading to the capital.
Last edited by Rkolsen on 21 January 2017 8:47am
Don’t let anyone treat you like you’re a VO/SOT when you’re a PKG.